In football, as in life, things have a habit of coming full circle. On the eve of England’s second international friendly against the Netherlands, Rachel Daly is facing the prospect of receiving her 50th cap at the home of the club that has played such an integral part of her life.

Walking out at Elland Road for the first time will be a special occasion for Daly for numerous reasons. Born down the road in Harrogate, she joined Leeds United’s Centre of Excellence as a youngster before going on to represent their senior team. She comes from a family of Leeds supporters, none more so than her influential father, Martyn, who sadly passed away in September last year. “My dad was a die-hard Leeds United fan, and he was the person who made me the biggest Leeds fan,” she says. “So, it will be hard for me that he is not there but, ultimately, he will have the best seat in the house and if I can make him proud, then that is all that matters to me.”

Daly has had her fair share of ups and downs. After progressing through the England youth system, she found herself on the outskirts internationally when Hope Powell was in charge. She was made to wait for her debut, eventually coming against Serbia in June 2016, but was then left out of the Euro 2017 squad by Mark Sampson. It was perhaps her versatility that played against her at the point but her ability to play in multiple positions caught the eye of Phil Neville, the subsequent England coach, and made her a mainstay of the squad. “I think in the past it has been used against me. I think you sometimes miss out on tournaments because you have maybe not excelled in one position, and you have been good in multiple positions,” she states. “Over the last few years, I have really embraced it and the staff here have used it in a positive way. Sarina [Wiegman] and Phil have both used it in a positive way and as you can see, I have played in multiple positions. I am really enjoying that role and I can’t see it as a negative because I am playing for England.” 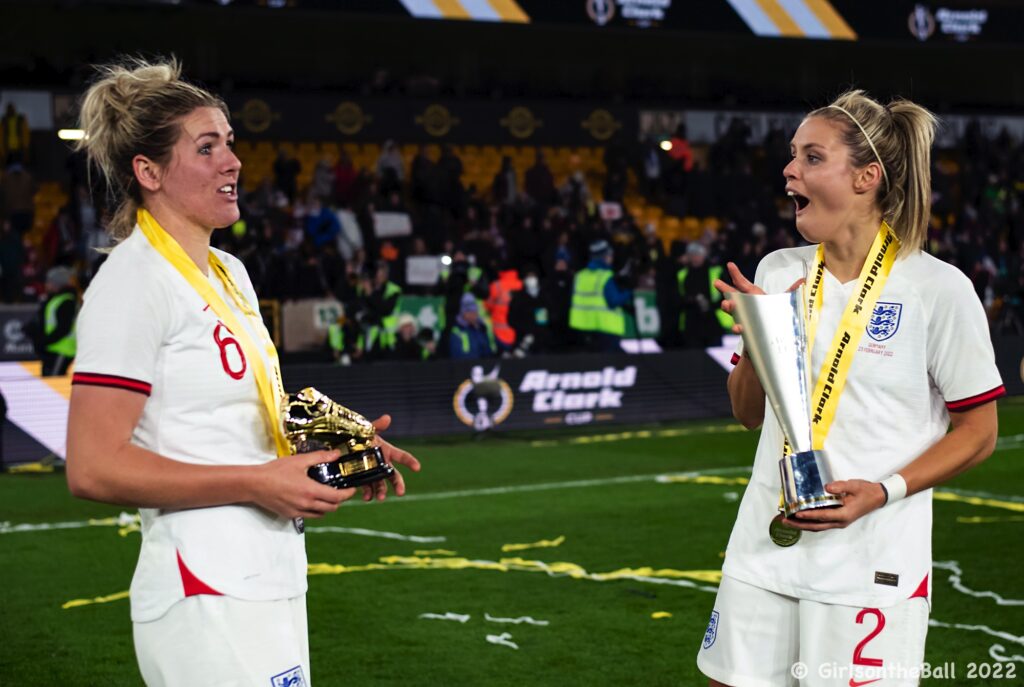 Daly’s ability to score from any position on the pitch has been clear to see with her 8 goals so far for her country and 42 for her club, Houston Dash. Against Belgium last week, she popped up in the box from the left-back role to send home a sweet volley after coming on as a second half substitute. While many think Wiegman should play her in the forward role more frequently, Daly appears to relish having other dimensions to her game: “For me, if I can score then great. I think I have a bit of a striker’s instinct when it comes to the goal and that is exciting for me. But I have now taken up a role where I really enjoy defending and I am embracing [that]. I got smacked in the face in training with the ball today and I absolutely loved it because it didn’t go in.”

With Euro 2022 on the horizon, Daly will appear at her second major tournament for the Lionesses. Plying her trade at Dash in the NWSL, where she is the captain, has allowed her to come into camp in full fitness, with the US season just a couple of months old. She is now one of the seniors of the squad and seeks to use that role to help some of the younger heads as and when they might need it. “It’s weird to think that I’m one of the more experienced players now. But yeah, obviously I am and I try and lead in that role and use my knowledge of previous tournaments and things like that to help the younger players. But they’ve come into an environment where they’re professional at club; they’re full-time at clubs and are doing really well. But you’ve got to kind of nurture them as well because tournament football is different. It’s a completely different kettle of fish.”

A defining summer awaits Daly and her Lionesses teammates. A key part of their success will be how they can blend the mix of youth and experiences that Wiegman has selected. She will inevitably play a crucial role throughout but will not get carried away, concentrating on taking each day as it comes. Focus, therefore, firmly rests on Elland Road, the Netherlands and England taking the next step towards their goals. It will no doubt be an emotional night for Daly but, as she has always done, one she will take in her stride.