GirlsontheBall began in August 2012 and has been going from strength to strength. We are two girls who follow the women’s game in the UK passionately. We cover the top 6 leagues in England, the Scottish Premier League, and the FAI Women’s National League in Ireland. In addition, we attend FA Cup, Continental Cup and Champions League games, not to mention England internationals.

On average, we travel 32,000 miles a year in our quest to see as much of the women’s game as possible. Our bosses, families and friends think we’re mad, some of them not seeing us for weeks at a time, but we love it too much to stop. Our bunny, Scotty, joins us for some of our journeys, keeping us company over the long distances.

Our coverage ranges from fixtures, results and league tables to regular blogs, articles, player interviews and videos. We have covered four major tournaments (2 European Championships and 2 World Cups) as well as many youth level competitions. We provide a live twitter feed from every game we attend and extensive photographs and interviews from the matches. In addition, we do live commentary, pieces for radio and TV, podcasts, video content and work with some of the key stakeholders in the game. 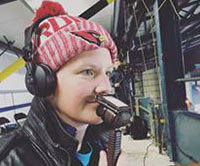 Sophie works as a digital marketer for Power to Change Trust, supporting the work of community business around England. She is also trained in web development and has worked in the third sector for the majority of her career. Football is her true passion. Every spare minute of the day is spent doing things GirlsontheBall related. She has trained her thumbs to tweet at high speed during tense moments of the games and is engaged in constant struggles with website code. At England games, she will often be spotted with a face full of paint, occasionally hidden under a flag when the going gets really tough. 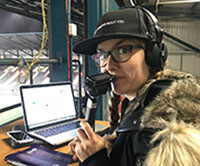 Rachel currently is a Digital Comms Manager doing all things digital/social media. The creative cog in the GirlsontheBall wheel, she can often be seen with a camera attached to her face during games. So much so that she often complains she’s so focussed on getting pics that she misses the play happening in front of her. Those who sit next to her will agree that she can certainly be relied upon for some witty commentary throughout a match.