Mid-week football returned with the Continental Cup Quarter-Finals yesterday. Eight teams remained in the competition as it heads towards its conclusion on 23rd February.

Our first stop of the week saw us travel across London to a freezing Boreham Wood for the match-up between Arsenal and Birmingham City. Always a close and competitive contest, this fixture between the two sides rarely disappoints. Both were coming into this fixture on the back of solid wins at the weekend.

As expected, the first half was a tight affair with both sides seeing good spells of the ball but with few clear-cut chances created.

The first real opportunity fell to the visitors as Charlie Wellings broke on to a long ball forward. In space, the English forward squared it to the on-rushing Chloe Arthur, whose shot received a vital deflection to send it wide. On the other side, Arsenal’s new signing, Katrine Veje, was proving a bright spark. With pace to burn, she chased down many a ball forward.

After 15 minutes played, Birmingham were awarded a penalty when Lucy Quinn was tripped in the box. Aoife Mannion stepped up to take the spot kick and hit a solid penalty that was met by an equally good stop from Sari Van Veenendaal. The Dutch keeper has been out of Arsenal’s starting XI in recent weeks and this will have done plenty to stake her claim for getting back that number one spot.

The second half started much the same as the first with both sides trading chances. Vivianne Miedema almost took advantage early on, finding a rare moment of space in the box but fired narrowly wide.

Down the other end, Emma Follis came close for the visitors and was denied by a crucial block in the area.

With about 20 minutes played, it was the visitors who took the lead, capitalising on a defensive mix-up between Arsenal’s defence. Pouncing on their hesitation, Lucy Quinn popped up in the box to bobble the ball over the keeper and into the back of the net.

Now behind, Arsenal turned up a gear. Kim Little was denied by a good defensive challenge in the box before Janni Arnth leapt unmarked in the area, only to head wide. It continued to look like a resolute and well-organised Birmingham were going to thwart the cup holders’ chances of retaining the trophy. However, with six minutes left on the clock, they equalised. The initial pacy counter had been well dealt with by Birmingham but the ball fell to Miedema on the right side. Her pinpoint cross found Danielle Van de Donk in the middle to head home.

Extra time loomed as the fourth official signalled three minutes added on. However, Arsenal weren’t done yet and saved themselves some energy ahead of this weekend’s big London derby. Right at the death, Miedema latched onto a pass in the box, rounded the on-rushing Hannah Hampton, and dispatched her shot. Arsenal celebrated as they made it through to the semi-finals of the competition.

Birmingham are well renowned for their defensive capabilities and boast the third meanest defence in the league this year.

They knew they had to be at their best to deny Arsenal’s high-scoring attack and for the most part delivered such a performance last night.

Of particular note, was captain, Kerys Harrop. She led her side by example throughout, recovering when she made an error and putting in some vital challenges in the box. She was definitely a contender for player of the match. 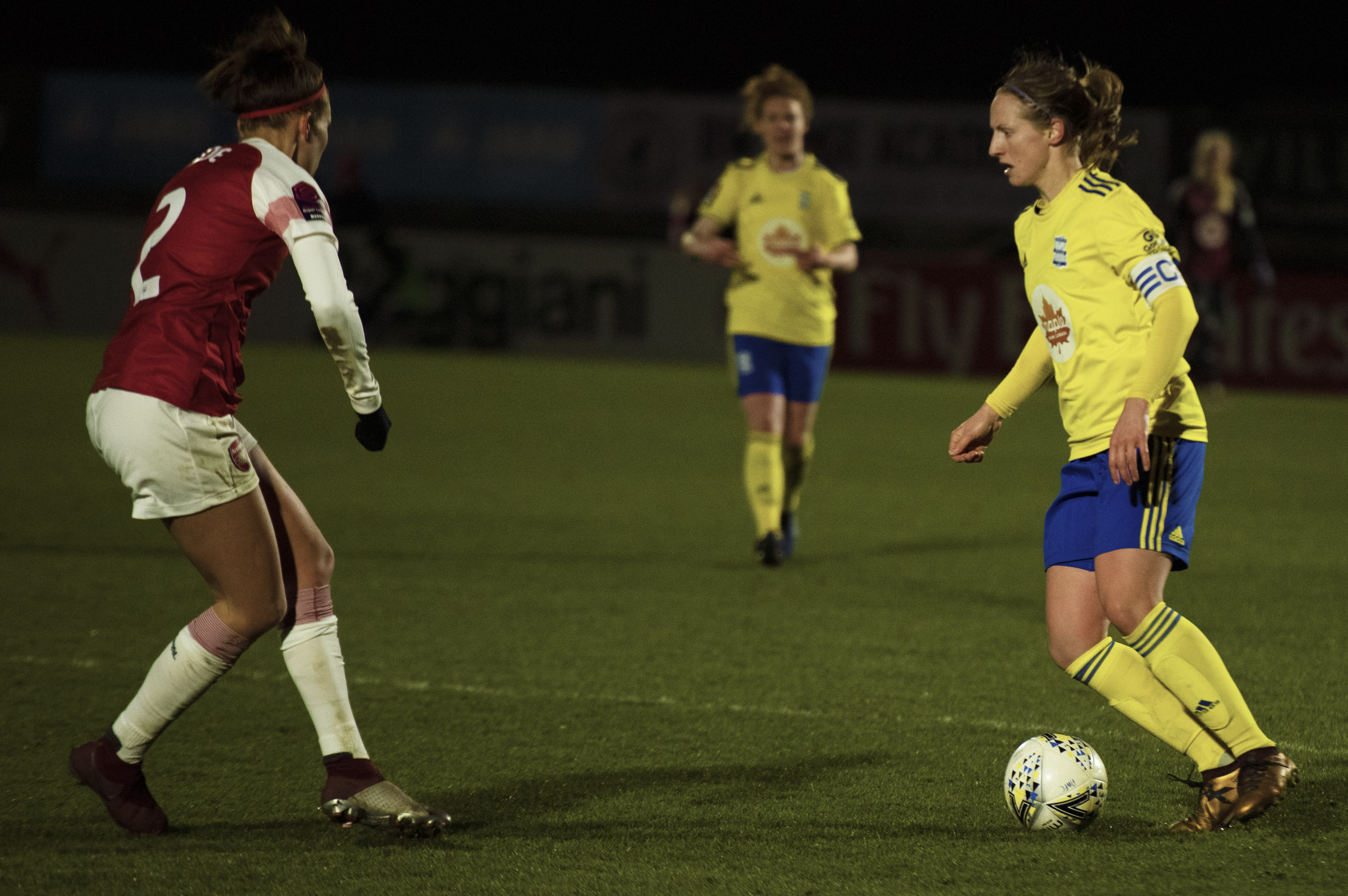 Finding a way to win

Sometimes it’s a true showing of your mettle, when you pull off a win when not at your best.

Arsenal were definitely not at their most flowing and dangerous last night, but they stuck to the task, dug deep and turned the game around. Their strength is the pace with which they can transition between defence and attack and it proved vital.

Squad depth for both sides has been a problem this season and is something that they need to address.

Birmingham’s form has made more impressive by the fact that they have been without the prolific Ellen White for the first part of the campaign. But their squad is stretched and after the loss of Ann-Katrin Berger to Chelsea last week, Marc Skinner has been unable to name a substitute goalkeeper for the last two matches.

Arsenal’s injury problems have also been well documented this year. Kim Little made her return at the weekend following a 10-week lay-off and the arrival of two new signings have helped but there is not a lot of cover for injuries across every position. They will have been relieved that knocks to Vivianne Miedema and Danielle Van de Donk early on in the game did not prove too serious ahead of their crunch match with Chelsea at the weekend.

The spotlight for much of the season has been on Vivianne Miedema but her compatriot, Danielle Van de Donk, has been hugely impressive throughout. She was everywhere in the middle last night, tracking back when needed and being the catalyst going forward. She added another goal to her tally this season. She was Player of the Match last night and is lining herself up for a strong shout at Player of the Season.