It was a quintessential David and Goliath story as Norway and Northern Ireland kicked off their Euro 2022 at St. Mary’s on Friday evening. The tournament’s dark horses against the newcomers, making history with their inaugural major tournament. The result was perhaps predictable – Norway ran out 4-1 winners – but the moment belonged to Northern Ireland.

Martin Sjögren’s Norway have been pipped as many people’s dark horses for the title. With Ada Hegerberg returning to the big stage, their attack oozes with potential – the likes of Caroline Graham Hansen and Guro Reiten looking to fulfil their potential on the big stage. Whereas their attack is brimming with talent, Norway’s defence is fallible. With an ACL injury to their number one, Cecilie Fiskerstand, there was a tournament debut for Guro Pettersen with just a number of caps to her name. There was also a makeshift centre-back partnership of Maren Mjelde and Maria Thorisdottir.

There is no avoiding the fact that Northern Ireland, on the other hand, come into this competition as the underdogs. 47th in the world, Kenny Shiels’ side are the lowest ranked team of the pack with many of the team only entering full-time training at the turn of the year. Buoyed on by pride, however, and a passionate and vocal Green and White army of fans, they were determined to make their mark. Shiels opted not to start Marissa Callaghan, who is only just returned from injury, with Chloe McCarron going into midfield alongside the influential Rachel Furness. Lauren Wade and Simone Magill provide the outlets up front.

From the first whistle, it was pretty much one-way traffic as Norway put their foot on the accelerator. The opener game in the 10th minute through the marauding Julie Blakstad. Capitalising on her attacking instincts, the left-back surged into the box to turn in an assist from Reiten.

The one thing Northern Ireland didn’t need to do was concede again quickly. Unfortunately, however, that is exactly what they did; the architects of their own downfall. Norway’s second was instigated by the press of Frida Maanum to nick it off Nadene Caldwell attempting to play it out of the back. The ball ricocheted to Hegereberg who unselfishly set up Maanum, who had continued her run into the box. 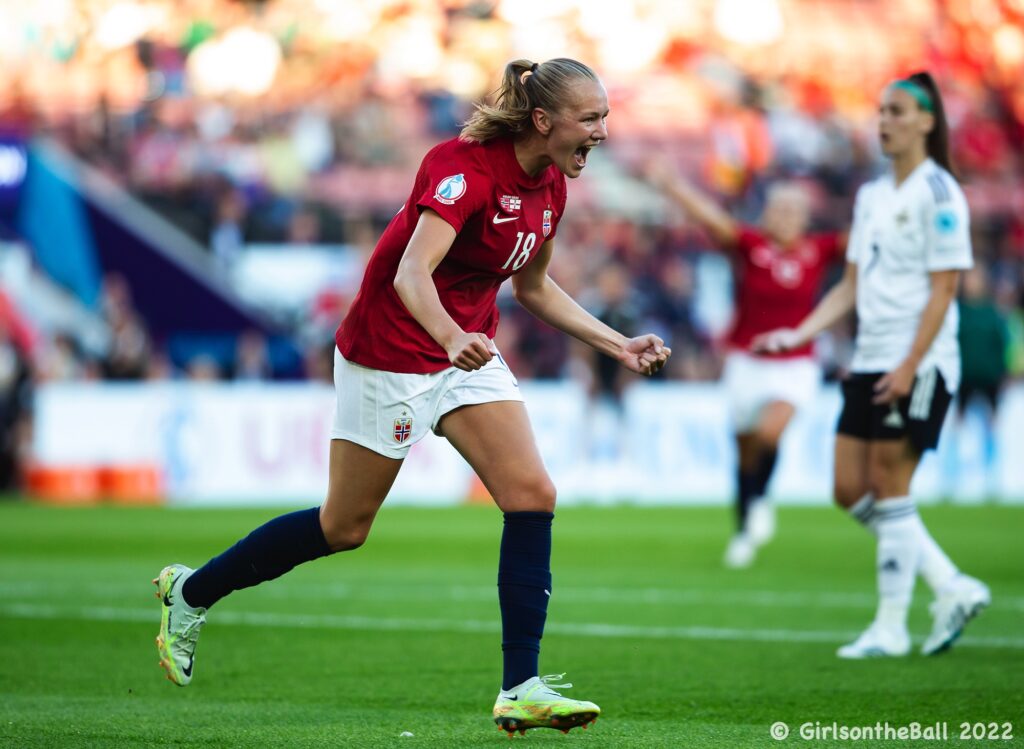 It was one-way traffic at this point, with Graham Hansen gliding over the turf, cutting the Northern Irish defence apart. But for two huge saves from Jacqueline Burns and Norway would have been out of side. The third did come with half an hour on the clock when Caldwell handled a delivery into the box. Graham Hansen stepped up and duly converted the spot kick.

Whatever Shiels said at the break as Northern Ireland returned to the field with renewed vigour. They began to press the Norwegian back-line and reaped the rewards with perhaps the moment of the afternoon. Julie Nelson, a stalwart in defence, got her head on the end of Rachel Furness’ cross to score her nation’s first ever major tournament goal.

Norway’s gap was restored five minutes later through a peach of a free kick from Guro Reiten. In all honesty, it was always going to be a tough ask for the tournament newcomers and they could not find a response. They will look ahead to Austria as a potential to show progression.

It was a comfortable win for Norway who will face England in the next group game. A performance that would have filled them with confidence as they look to ruffle the hosts’ feathers on Monday.