“It is a very special moment being a childhood fan, being at the Emirates and scoring an important goal like that. You work with a player every day and they get to live a moment like this. We’re all very happy for the goal as a team but also for Lotte as an individual and understand that it’s a special moment.”

As Arsenal manager Jonas Eidevall alluded to, football has a habit of tugging at those heart strings. Those special moments it creates were no better illustrated than when Lotte Wubben-Moy found herself in space in the box to hammer home a valuable equaliser for her side. Having come through the Academy and an Arsenal fan through and through, it was the perfect script for the young defender’s first start at the Emirates.

Arsenal were faced with a tricky task as the experienced Wolfsburg visited North London on Wednesday evening. While Eidevall’s team has made notable progression in recent months, the German side are the more experienced in European competition and had dispatched of Chelsea easily back in December. They boast the UWCL’s current leading scorer, Tabea Waßmuth, who started in attack, and one of the most exciting young midfielders in the game in Lena Oberdorf.

Eidevall named the strongest side available to him with Vivianne Miedema taking up her now customary number ten role behind Stina Blackstenius. Wubben-Moy was handed a start alongside fellow Arsenal product, Leah Williamson, in central defence while Katie McCabe was pushed forward into attack.

In front of just over 5,000 spectators, it was the hosts who started on the front foot, taking the game to their opponents. Within a minute, Beth Mead had broken through their defence only to turn her low shot narrowly wide. McCabe was full of running, covering every inch of grass at either end of the pitch and trying to force errors from a very well-organised outfit. 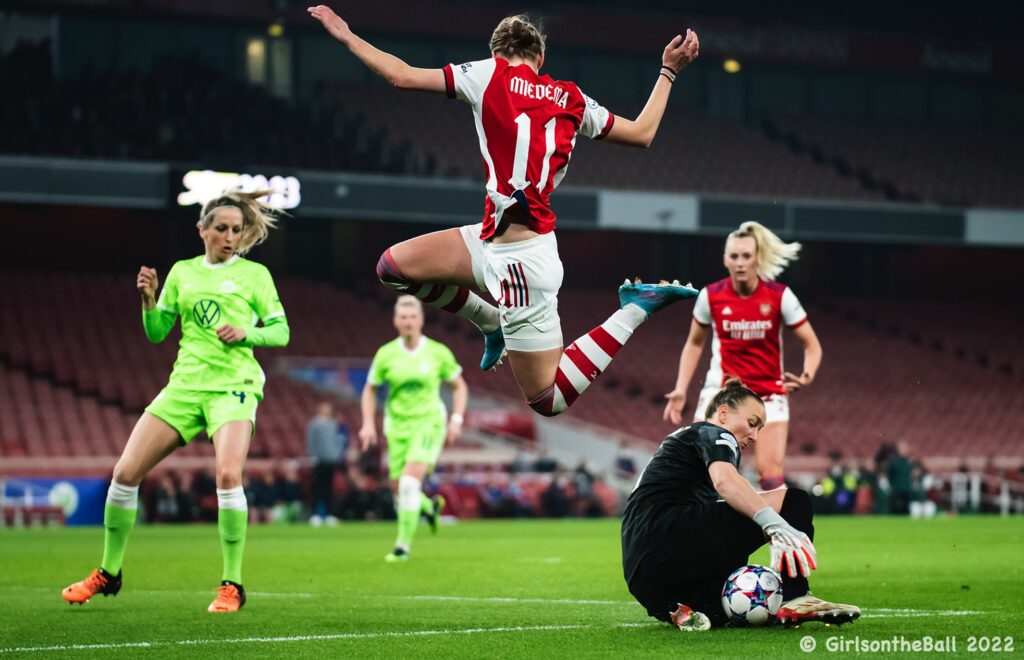 The visitors, however, threatened on the break. They served Arsenal a warning when Svenja Huth sent an unmarked diving header narrowly wide. It was one the Gunners did not heed, and Wolfsburg found themselves ahead with just 20 minutes on the clock. With the backline at sixes and sevens, Joelle Wedemeyer lifted the ball back into the danger zone for Waßmuth to head home. It was the forward’s ninth goal of this Champions League campaign, a perhaps unexpected feat: “I am not sure why it is happening so nicely in the Champions League this season but I’m working hard and that’s probably the key to my success”.

Whereas in the past conceding in this fashion may have done for Arsenal, they quickly regrouped and sought an equaliser with renewed gusto. Miedema saw a powerful effort deflected wide before she somewhat unintentionally set up McCabe for a sweetly struck long distance half-volley. It was McCabe who then forced the first real save from Almuth Schult, while Mead and Noelle Maritz also saw chances come and go.

An important team talk was need from Eidevall to keep his side’s spirits and belief up going in to the second half. It appeared to pay off as they started full of urgency but without the luck to see the ball over the line. Blackstenius had the ball in the back of the net after one of her counterattacking runs but she had just strayed offside. Minutes later, Mead, ever energetic, placed a perfect low cross practically along the goal line that somehow just eluded Miedema sliding in at the far post. 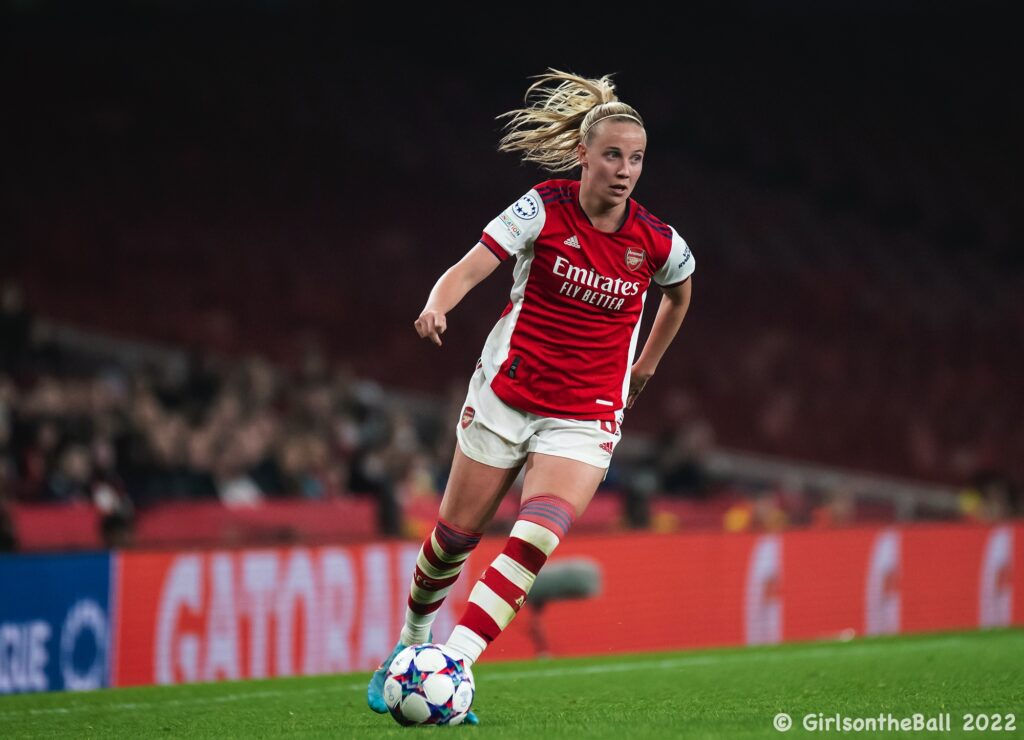 Having withstood a strong spell of pressure, it was Wolfsburg’s turn to attack. They found themselves out of luck themselves when Waßmuth and Jill Roord hit the post within a matter of minutes with it seemingly easier to hit the back of the net on both occasions.

With ten minutes to play, Eidevall brought on Nikita Parris, Tobin Heath, and Frida Maanum to freshen up some weary legs. They added renewed vigour as Arsenal pushed once more for an equaliser.

As soon as Miedema was tugged back 25 yards out, it felt inevitable. With a minute left on the clock, Heath stood over the free kick assessing her options. Drilling it in low, she found Wubben-Moy in the area with the time and space to execute her shot. As it hit the back of the net, she wheeled away in delight and into the embrace of her teammates, a memory to last a lifetime. 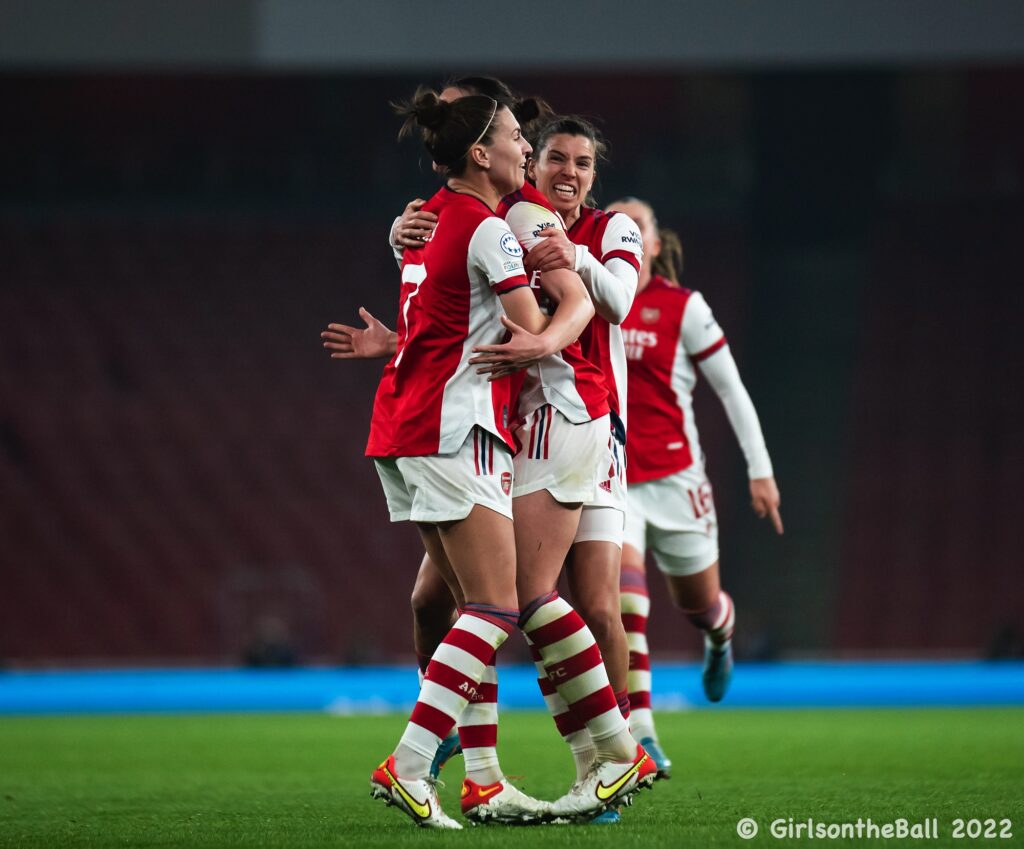 It was a goal that kept Arsenal very much in touch in this Champions League quarter final. The second leg takes place in Wolfsburg in a week’s time and is a notoriously hard place to visit. The London side, however, will take a lot from a gutsy display that showed them on a level with their German counterparts and more than capable of putting in a performance to progress in the competition.