Rendell excited at the prospect of making Saints history

In the last few seasons, Southampton have had strong FA Cup runs, with Marieanne Spacey-Cole’s side pushing Birmingham City all the way in last-year’s Fifth Round. This year, they look to go one step further and reach the quarter-finals for the first time in their history.

They have already taken a bigger, unfamiliar scalp this campaign, beating the Championship’s Bristol City in the last round. This time, they have a much more familiar opponent in their main rivals for the FAWNL Southern Premier, Ipswich Town. Both sides are enjoying brilliant inaugural seasons in the FAWNL’s top division and will push all the way for the title and promotion.

Kayla Rendell has been a Southampton player since she was 15 years old. Now at the age of 20, she is the Saints number 1 keeper. We caught up with her ahead of a huge weekend for the club.

How are you feeling ahead of a big FA Cup weekend?

I think all the girls are excited. It’s another experience in the FA Cup in another round, and an opportunity to go our furthest possible into the quarterfinals. To have Ipswich as well, it just adds a bit more drama.

How much does it mean to you playing in a competition with so much history?

I love it. Like every occasion in the FA Cup is just special, isn’t it? I think for everyone that gets the chance to play in it, it’s really special. I just look forward to everything because there’s so much on the occasion and just an opportunity to get through to the next round. But also, to play different teams. I know we’ve got Ipswich this weekend, but it’s an opportunity to play bigger teams that we wouldn’t necessarily play in our league. We’ve had Bristol and again that was another experience.

Last season, you beat Lewes and then took Birmingham all the way in the 5th Round. As you’re looking to progress forward as a club, that must be really encouraging to show that you can bring yourselves to that level?

I think the Championship and even higher is where we want to be at the end of the day. So, to be able to play those sorts of teams and show that we can fight against them is good at the moment. The standards we have in training alone are incredibly high, so I think we’re just wanting to be ready for that next step.

This weekend, you play Ipswich Town, a team you know well and big rivals in the league. How are you expecting the game to play out?

We’ve played them twice this year – once in another cup and then once in the league, and it’s gone either way each time. So, it will be another big game. I think it will be quite a feisty game – quite a lot of fight in it, quite a lot of emotion. But at the end of the day, it’s just who can play the best football and hopefully, we’ll come out on top. 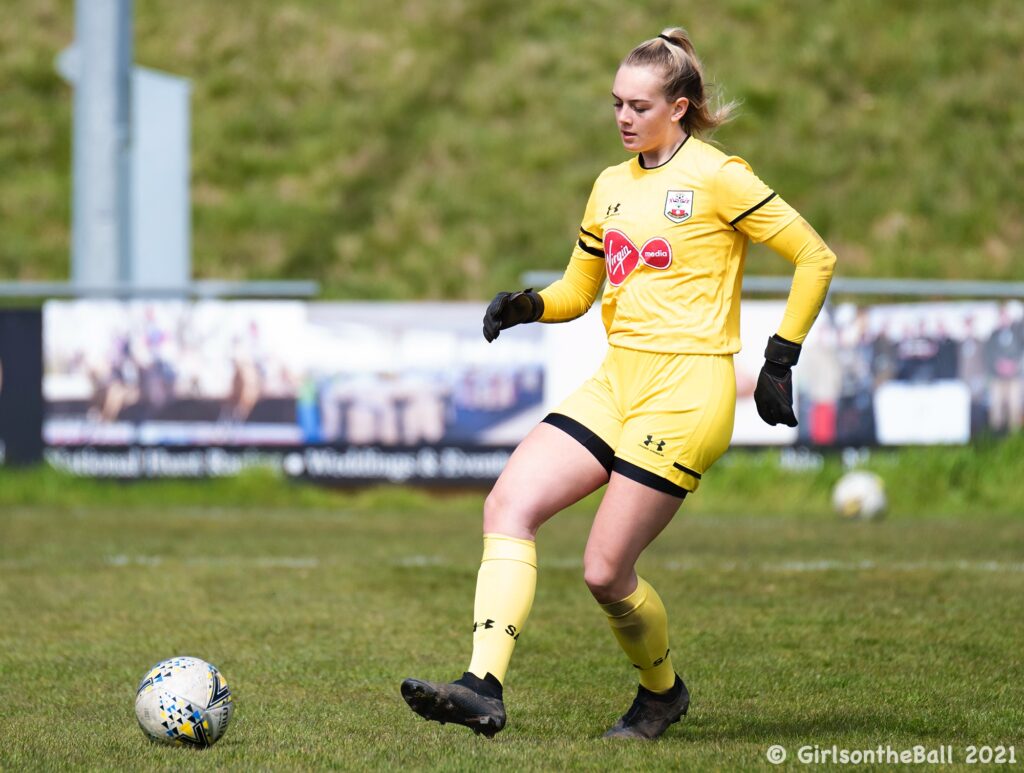 This season’s FAWNL Southern Premier looks riveting from the outside. It’s in your control because you have those games in hand. Is it just taking it one game at a time to try and reach your goal of getting that title?

Definitely. I think we’ve just got to look at it one game at a time, because we’ve got so many games left to play in such a short period. Just taking each game as it comes and getting the result every time, and then looking to the next one after that. Otherwise, if we look too far ahead that’s when things start going wrong.

You got to this stage of the FA Cup last season against Birmingham. What did you learn from that both as a team and individually?

I think that as a team we learned that we could play against that higher opposition and give them a bit of a game. Individually, we showed that we’re at that standard where we can play in the Championship or higher. I think it’s just learning more of the emotional side, to mentally to stay in control of those sorts of games. Because when it might not go your way in parts of the games, you might fall behind or whatever, it’s just about keeping that mental side of it. Then the football will do the rest of the talking.

Talk to us about Southampton; you’ve been here for a while now, what is it about the club that you love?

I love it here. I ‘ve been here I don’t know how many years now? Probably 6/7 years. Everything’s just amazing. The standards – everything’s so driven, so high, which is what I love. You just get pushed every day. I don’t think people realise the backing we have at this club, like the training facilities, or the coaches we have around us, and the players we have involved. But it’s crazy to think who we have in here. I think the motivation is just to keep pushing on and for all of us to push to get to the highest level we can possibly reach. I think that’s what really drives it here.

Marieanne Spacey-Cole previously talked to us about the club’s approach of developing players and how it’s all about aspiration rather than expectation. Is that important for you as players to be able to feel that you have the time to be able to make mistakes and learn and develop as well?

Definitely. I think we have the backing every day in training. Obviously, no one’s perfect. No one’s going to do everything right every day. But I think learning from your mistakes that’s a big thing in football. And I feel like everyone’s going to make mistakes and we have that knowledge from the staff to help us push on and make us better as people and as footballers.