FAWNL Premier Division | MatchDay 10 Round Up

Match day 10 of the FAWNL Premier got underway on Sunday 10th October as teams looked to build on their starts to the season.

Read all about the action in the Premier Divisions here:

Middlesbrough got back to winning ways on Sunday afternoon as they left it late to edge past Loughborough Lightning.

After a tight first half, the visitors took the lead after the break as their captain, Rebecca Olley, chipped Lightning’s keeper. But the hosts hit back almost immediately as Abby Towers sent a cross into the back of her own net.

The winning goal came deep into injury time. In the 92nd minute, Armani Maxwell drilled a shot home to seal the three points for her Middlesbrough team.

It’s been a good week for Huddersfield Town who registered their third win in as many games to move up the table.

They were ahead within a minute of play as Elford intercepted a West Brom clearance to score. The hosts battled, however, and found an equaliser when Shannon Stamps chipped the keeper. But Huddersfield re-took the lead just before the break when Elford notched her second in a goal-mouth scramble.

The visitors made sure of the victory mid-way in the second half. Serena Fletcher scored her second of the season in spectacular fashion as her cross dipped into the back of the net.

Wolves came from behind in a five-goal thriller against Hull City to go to the top of the table.

The opener came right at the start for the hosts as Leonie Joyce turned home a Laura Cooper cross. Hull have been struggling this season, but they stuck in the game and got their rewards just before the break when Liberty Bott smashed home a free kick.

Emily Smith then fired the Tigresses into the lead. But Wolves rallied and Helen Dermody levelled. They then re-took the lead just a minute later through Lauren Riley to complete the comeback. 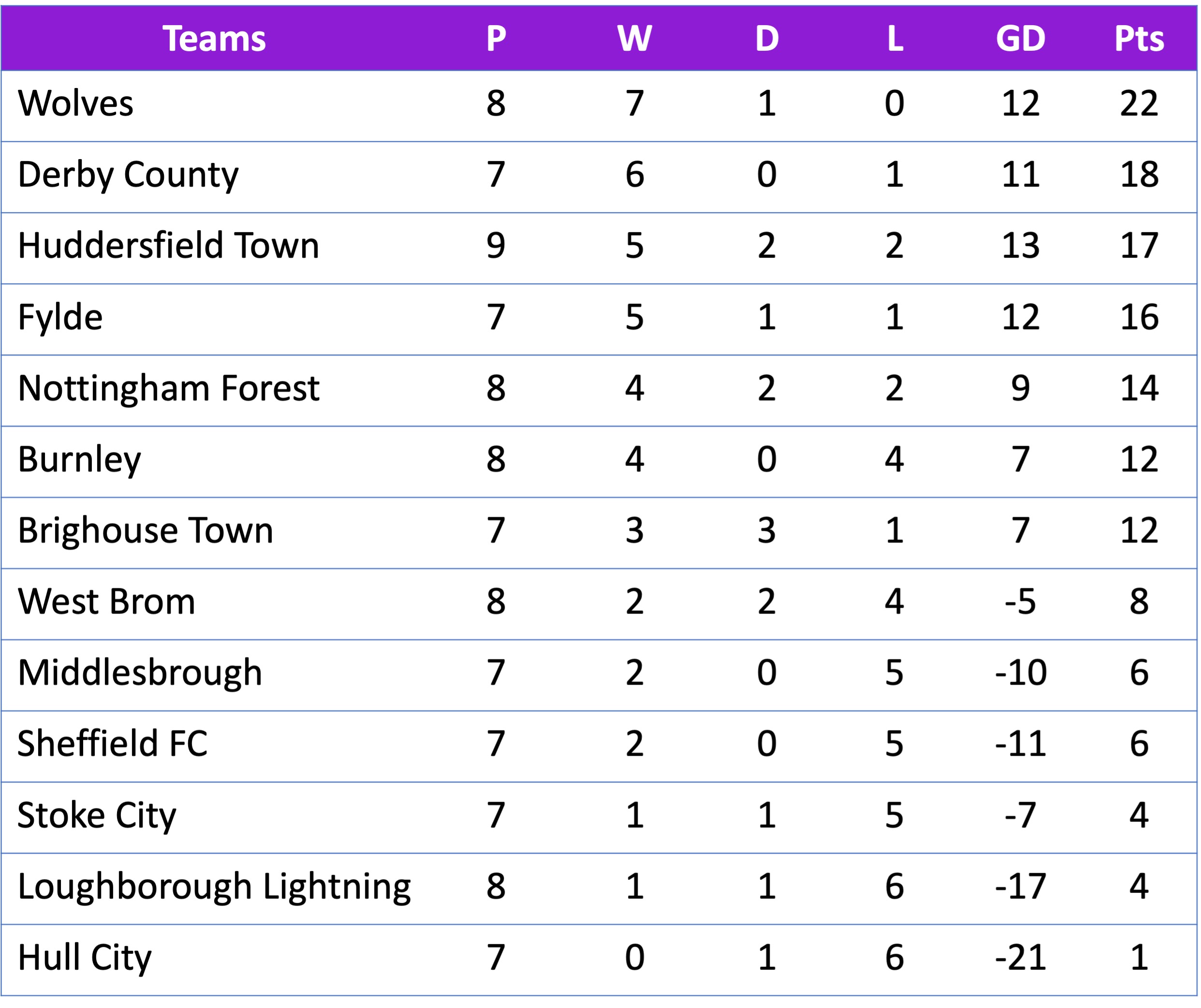 Crawley Wasps bounced back from mid-week defeat as they put five goals past Chichester.

Ciara Boylan pounced in the box early on to send the hosts into the lead. Captain Naomi Cole then added a second from a free kick. Imogen Lancaster turned home a re-bounded effort before Boylan notched her second just before the break.

It was a quieter affair in the second half. Emma Plewa added a fifth with nine minutes to play after a brilliant run from Iesha Swaby.

Keynsham Town returned to winning ways as they travelled to league strugglers, Hounslow.

They left in late to find the winner. Kerry Bartlett scored in the 89th minute to break Hounslow hears and ensure her team headed home with the three points.

With Southampton’s game postpone, Ipswich Town moved to the top of the table with their 100% record still intact.

Lucy O’Brien sent the hosts ahead within five minutes as she slotted home against her former club. Zoe Barratt then did the same as she doubled the scoring in the 21st minute.

Barratt added a third deep into second half injury time to ensure a comfortable victory for high-flying Ipswich.

London Bees ended Gillingham’s impressive run of victories with a comfortable performance at the Hive.

Hannah Porter scored her first goal for the club, opening the scoring with half an hour played. Her second came mid-way through the second half, as she once again turned home a delivery from Courtney Ward-Chambers.

Jo Wilson then hit her third in two games as she broke through onto Nikki Jancey’s pass. Ward-Chambers then rounded the game off in the final minute of play, heading home a Flo Gamby cross.

Bridgwater United lost their manager, Jamie Sherwood, this week after his resignation. It didn’t seem to affect the winning run, however, as they climbed to third in the table.

The visitors took the lead just before the break as Poppy Wilson notched her third goal of the campaign.

Meesha Dudley-Jones doubled the score mid-way through the second half to make sure of the victory. 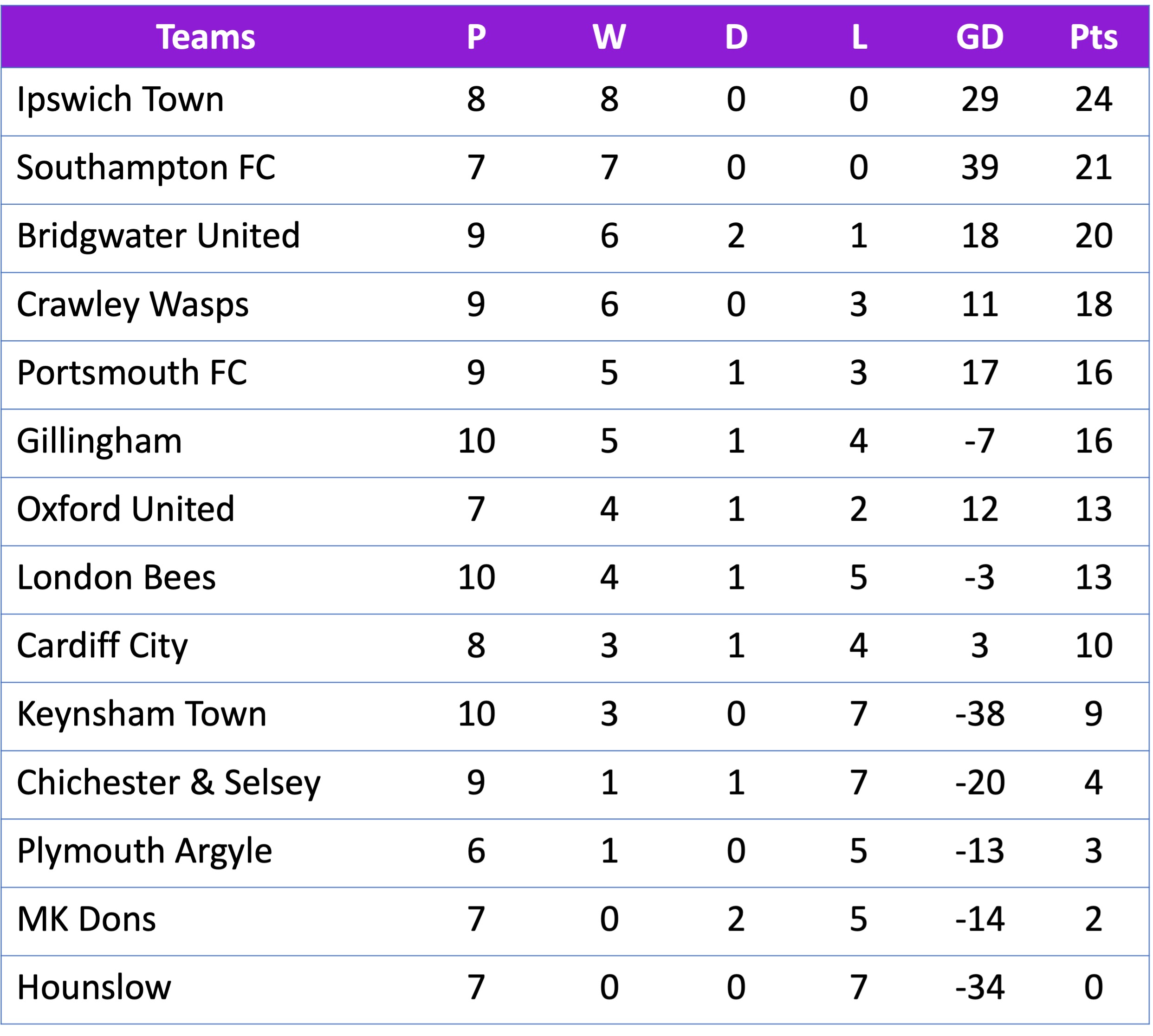