Despite a stern test from Austria, Germany booked their place in the semi-finals with a 2-0 victory over their close neighbours. Goals in either half from Lina Magull and Alexandra Popp will see the Germans head to Milton Keynes next Wednesday to face either France or the Netherlands.

Austria, under the cool leadership of Irene Fuhrmann, have proved a surprise package this tournament. They have appeared to enjoy every minute, whether it’s dancing through press conferences or pulling power poses on the pitch, they have injected energy both on and off the field. There was little doubt that they would throw everything at Germany. Viktoria Schnaderbeck and Katharina Naschenweng, both doubts, were included on the bench with Marina Georgieva, Fuhrmann’s single change, coming in at centre back.

Germany, on the other hand, saw the return of three key players to their starting XI. The influential Lina Magull returned after a hamstring issue, while Lena Oberdorf and Felicitas Rauch returned from suspension.
Alexandra Popp led the line once more as she continues on her mission to claim the Golden Boot.

Germany, inevitably, put on the pressure in the early stages of the match. After conceding a couple of initial chances, however, Austria settled comfortably. They made their presence known with a few physical but legal challenges just to let the Germans know they had a fight on their hands. They should have taken the lead, with their set piece delivery causing the opposition defence plenty of problems. Georgieva got her head on one of these crosses but agonisingly sent her header against the post.

Everyone knows you have to take your chances against Germany because they can hit you with just one opportunity. This was precisely what happened in the 25th minute. A poor clearing pass from Manuela Zinsberger was recycled at speed. Klara Bühl skinned Carina Wenninger before setting up Magull to drill home. 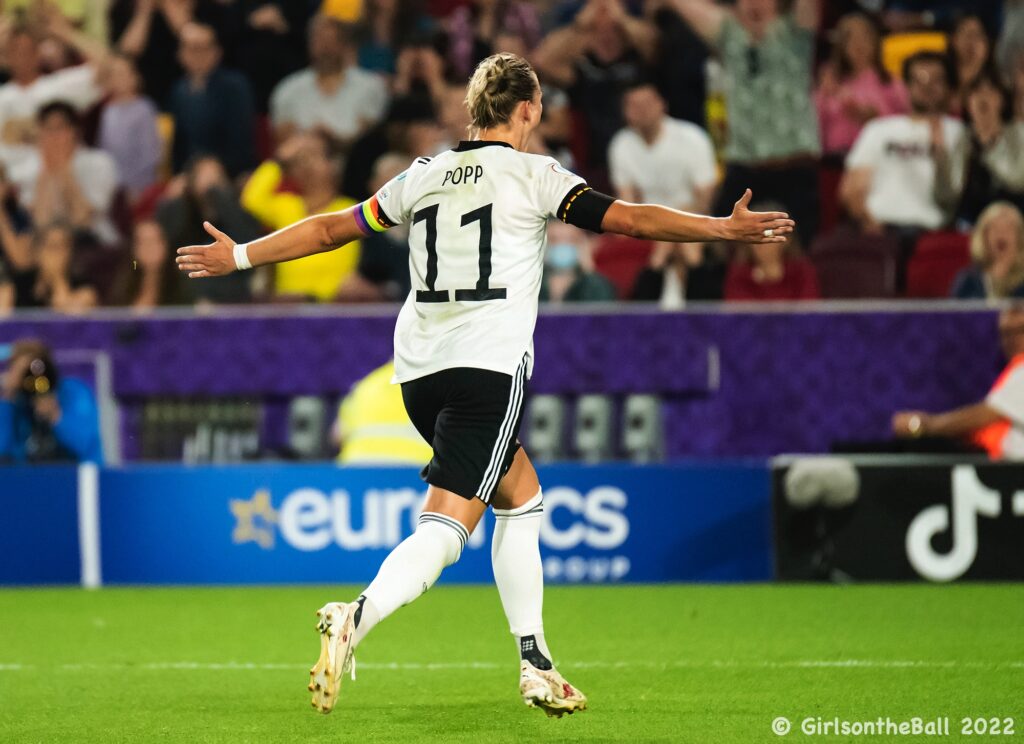 The first half became stretched as Austria desperately sought an equaliser. They were afforded plenty of space but just lacked quality and good decision-making in the final third, in particular by Julia Hickelsberger-Füller. It left the Austrian defence open to the counter, Zinsberger keeping her side in the tie with a smart stop off Svenja Huth.

Austria’s lack of luck in front of goal continued into the second half. Barbara Dunst could count herself unfortunate when a spectacular 40-yard curler beat the stranded Merle Frohms but clipped the top of the woodwork. They would hit the upright once more through Sarah Puntigam. At that point, you were thinking it just was not going to be their night.

Germany continued to threaten on the transition, with Austria leaving Popp open more times than was sensible. Bühl saw a shot hit the bar herself before having the miss of the evening, skewing a shot wide of an open goal from 8 yards. She was substituted immediately – unintentionally, one must add – and the camera shots of her on the bench said it all.

The tie was decided in the 90th minute. Popp, a menace for Zinsberger all evening, charged down her clearing kick as Austria dawdled on the ball at the back. The ricochet ended up in the back of the net, her fourth of the competition making her the only player to score four in different games in a Euros.

Germany manager, Martina Voss-Tecklenburg, was keen to compliment her opponents post-match. “We played against a very good side,” she said. “Huge compliments to Austria. The game could have ended 6-3. We are happy that we won the game. We didn’t want to concede so many set pieces but we did better in the second half. I still believe that we leave the pitch as deserved winners.”