The club is on the brink of greatness. They made history by reaching the Champions League final for the first time this weekend, while also being on the cusp of lifting yet another FAWSL trophy. Murmurings of “the quadruple”, which began early in the season, have turned into serious discussions in pre- and post-match analysis on the pages of many newspapers. It is an achievement only previously managed by Arsenal more than a decade ago; one that has eluded so many of the best football teams, male and female alike, in English football history.

Arsenal is also the only other English team to have reached the Champions League final. They were the pioneers, the ones to aspire to be, paving the way for the game in this country. They were where Hayes cut her teeth, a core part of Vic Akers’ coaching staff: “It is still today one of my most favourite memories in football and a pleasure to have been a part of that journey with Vic Akers, the greatest football manager in the women’s game.” 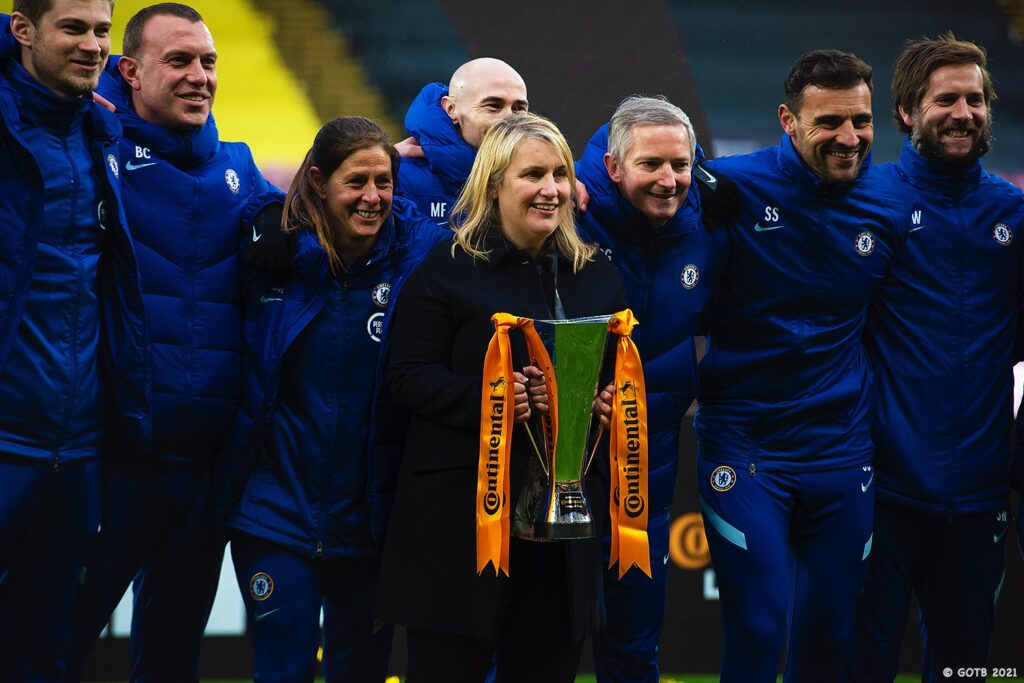 And as the women’s game has catapulted forward, Chelsea have now sped ahead, becoming the new leaders, and setting the standards.

Since the Community Shield back in August, the Chelsea train has only gathered steam. But while it is clear that Chelsea are enjoying their best season ever (we would say even better than their unbeaten 2017/18 FAWSL campaign due to their ability to compete on multiple fronts), it isn’t something that has happened over night.

We have witnessed the growth of Hayes’ Chelsea over the years. As fans of the women’s game, it has been a joy and an inspiration to watch. The heartbreak, as much as the highs, have led them to this point. From losing out on the 2013 title to Liverpool by the smallest of margins (there were just two goals in it) to the first time they got their hands on the trophy in 2015 and picking up their maiden FA Cup in the same season. Their progress in Europe saw them reach the semi-finals twice, only to be thwarted by Wolfsburg (the third time the Germans had thrown them out of the competition) and then Lyon.

This journey is something that Hayes has been keen to stress in many of her interviews – years of hard work that has involved many thousands of hours. She has gained a reputation as a master tactician, pouring over tactics boards, line ups and set pieces. Her dedication to and love of the game and her team is clear every time she speaks. And in truth, we often find ourselves so absorbed in her press conferences, that we often miss the opportunity to ask a question.

The Chelsea jigsaw has taken nine years to piece together and is far from complete. With the significant support of her club, Hayes has gathered a squad glittering with international stars who are equally invested in her ambitions. It has taken many seasons to find the perfect mix – the right players with the correct mentality, attitude, and skill to add to the foundations that have been carefully built. Piece by piece, season by season, Hayes’ team have grown in both talent, confidence, and depth. Some stalwarts remain, like Drew Spence and Hannah Blundell, key figures who were there in the early days when wins were few and far between. There are the star-studded arrivals, like Sam Kerr, Fran Kirby and Pernille Harder, who have understandably stolen the headlines. And there are the shrewd signings, like Ji So Yun and Magdalena Eriksson, who have proven to be the linchpins in the squad.

I got to this level through my hard work, my determination. And I’m fortunate enough to work for a football club that I adore; that have given me license to do this. And I work for a set of players that were always in control. They did everything possible today.

A club’s commitment to a manager and a manager’s meticulous dedication to a team is a recipe for success. This journey transcends men and women’s football. It transcends sport and can be a lesson for anybody bringing a successful team together. Hard work, time, trust, single-mindedness, deep understanding of the sport, and the right mentality. As Michael Jordan once said, “Talent wins games. But teamwork and intelligence win championships”.

Barcelona stand between Chelsea and their first UWCL trophy. The Spanish side are chasing history of their own, looking to put the bad memories of the 2019 Final to bed and become the first Spanish side to lift the trophy. They are having an equally phenomenal season, unbeaten in the Primera División and heading towards a sixth domestic title.

Victory, therefore, is by no means a given. But for Chelsea, whatever the outcome on the 16th May, their evolution cannot be denied. They are the best team in the country (probably one of the greatest sides England has ever seen). They arguably have the best manager in the world, a woman at the pinnacle of her sport. And it is hard not to feel that we are only at the beginning of finding out what this group can achieve.