If a lifetime of consuming football teaches you anything, it is to always expect the unexpected. But even with full awareness of that, some events just take you by surprise. Sitting in the Groupama Stadium watching Arsenal lead the European Champions 5-1 with 20 minutes to play was one such moment. Jonas Eidevall described it as “a special night” after his side inflicted Lyon’s heaviest defeat since April 2006.

“We deserved to win, but of course 5-1 is an unexpected result against a very strong Lyon team,” Eidevall continued. “I’m very happy about that. Tonight, we were rewarded for doing the right things.”

Yes, Lyon’s injury list is extensive. They were missing a host of starters including the likes of Ada Hegerberg, Ellie Carpenter, Sara Däbritz and Catarina Macario. However, the side Sonia Bompastor named was one many coaches would wish to have at their disposal – a midfield trio of Amandine Henry, Danielle van de Donk and Lindsey Horan can hardly be considered second rate. The current D1F champions came into this match unbeaten in the last five, sitting top of the division.

Arsenal entered this game in an equally good run of form, still yet to lose this season. They have looked a little edgy, however, in recent matches. Reading succeeded in stifling their attack on Sunday, conceding just once, while Ajax had caused them some consternation in their Champions League Second Round encounter. Jonas Eidevall was still without his first-choice centre-back pairing, with Steph Catley and Lotte Wubben-Moy stepping in once more. The one notable change was the inclusion of Frida Maanum in the number 10 role instead of Vivianne Miedema, perhaps with an idea to add more defensive solidity to the side. 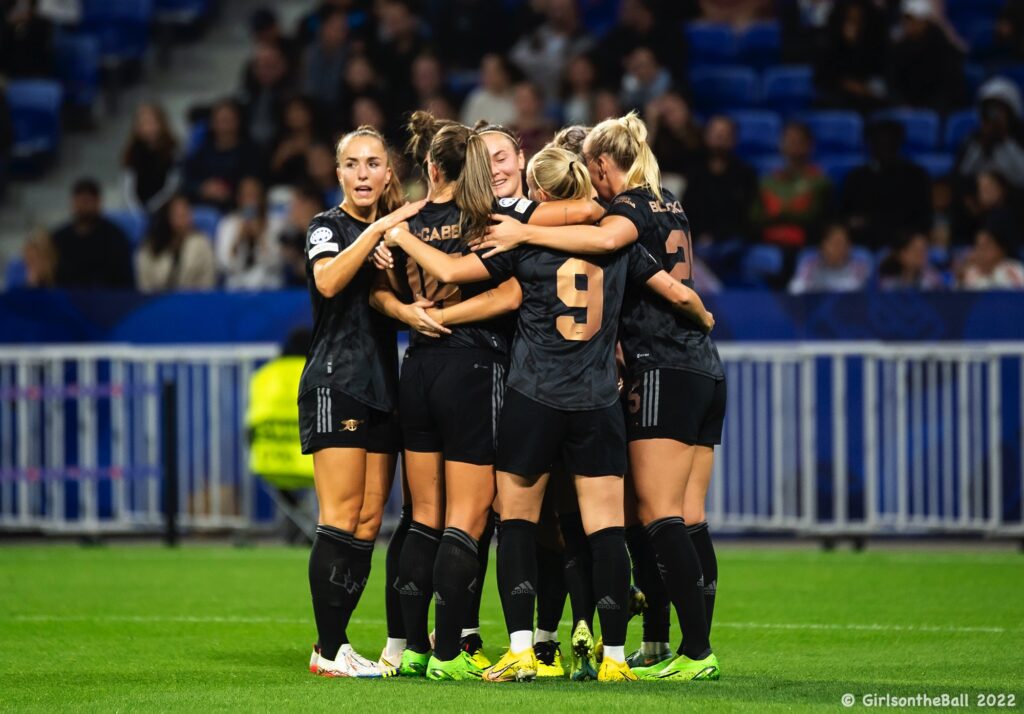 The teams took to the field in front of just over 8,000 in Lyon – a perhaps disappointing number given they are the competition holders. Nevertheless, the OL Ang’elles were loud, the beat of the drums and constant singing echoing a somewhat sparse stadium.

It was the visitors who started the stronger, Eidevall’s tactics spot on to nullify Lyon’s threat. They were patient with it, resolute on and off the ball, while choosing their moments to advance up the pitch. With just 13 minutes on the clock, they struck an arrow into the Lyon defence with a lightning attack from back to front. Instigator in chief, Kim Little, only needed a glance to spot the run of Beth Mead. She in turn turned a pinpoint first-time cross into the area for Caitlin Foord to direct in the back of the net.

A response from Lyon was expected and the goal appeared to kick them into gear. They rallied, increasing their possession stats and opportunities in front of goal. Both Janice Cayman and Horan saw efforts from distance that drift narrowly wide of Manuela Zinsberger’s post before a trademark Wendie Renard header was blocked off the line by Laura Wienroither.

Despite this wave of pressure, the Gunners appeared unruffled. Their midfield three were enjoying plenty of space to operate in and it was from this the second goal arrived. Lia Wälti, afforded time on the ball, threaded a pinpoint pass to Stina Blackstenius that split the Lyon defence. Christiane Endler was equal to the first angled shot but Maanum, ever alert, pounced on the rebound to convert.

Anxiety levels amongst Arsenal fans were raised when Lyon pulled one back on the half hour mark. An undefended corner was smacked onto the bar by Horan with Melvine Malard able to bundle home the rebound. There was a feeling that this was the platform the hosts would need to build momentum. but it never came. In fact, the deficit was restored just before the break when the woman of the moment, Mead, arrowed a low free kick past Endler to ensure the Gunners had a cushion. 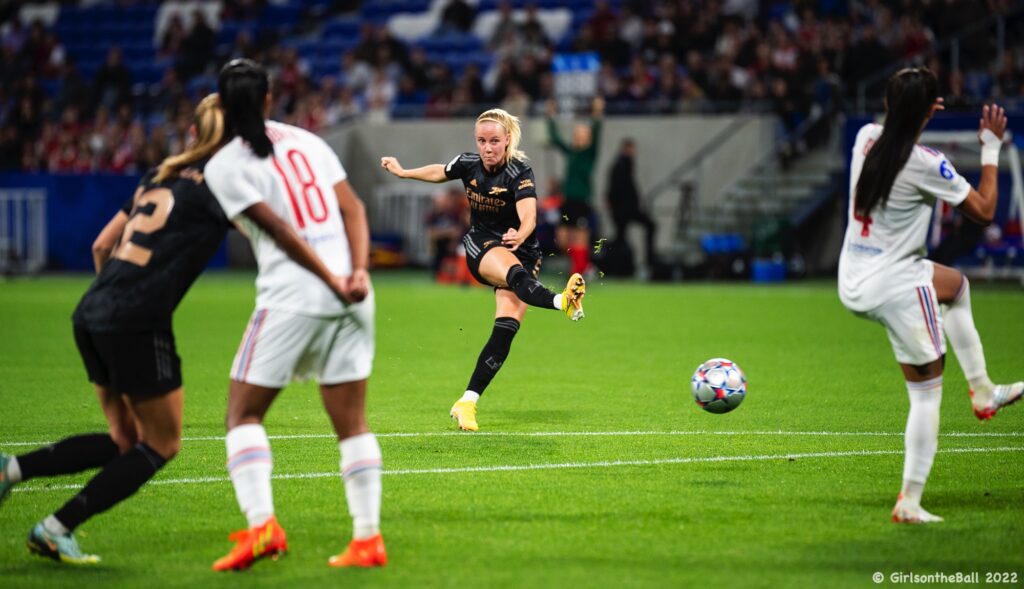 The second half continued in much the same vein as Arsenal seemed in apparent control of proceedings. Once they beat the pressure of Lyon’s front three, they had acres of green grass ahead to roam into. Little shone in the middle of the park, directing the play as a puppet master would pull on the strings. The confidence flowed through the side as they added two more to their tally.

A Wendie Renard mistake in the 67th minute presented them with the perfect opportunity. Foord intercepted the pass out with a sublime first touch that allowed her to set herself before dispatching a sweetly struck effort from about 25 yards. Two minutes later, they had another. The impressive Maanum once again spotting the intuitive run of Mead; the forward took one touch before firing past Endler in the Lyon goal.

Eidevall cut a satisfied figure after watching his side overcome a potential banana skin to their building momentum in style. “We were very effective tonight,” he said. “But as I told the players after, they worked extremely hard to carry out the gameplan and looked after the details. When you do that sometimes these things happen.”

This Arsenal side will return home to London knowing that anything is possible. Nothing is won yet, of course, and there are other hurdles to overcome. But Wednesday night in Lyon was a headline-worthy win that will build the foundations as they look to grow into the competition.