Vera Pauw praised her “special group'” of players as the Republic of Ireland claimed a FIFA World Cup play-off spot for the first time in their history. Pauw’s team dug deep and never stopped running to earn three points off a tough Finland side in front of a record-breaking 6,952 spectators in Dublin.

“I couldn’t believe it”, Pauw said about her reaction at the final whistle. “I was watching the ref. I was like, “Come on ref! Come on ref”…Every minute, it went too slow. From 78 minutes, I think I watched the scoreboard five times a minute at least.”

Pauw was right to be satisfied with her team’s achievement. There has been plenty of buzz and growing momentum around Irish women’s football in recent months as the national team looked to go one step further on their international journey, determined not to endure heartbreak at this stage once more.

And to be honest, the early part of the game felt like history was going to repeat itself. Finland – much changed since the summer and with a new manager, Marko Saloranta, temporarily at the helm – took to the pitch with a point prove. With Niamh Fahey ruled out through injury, Megan Connolly had to drop into the back three and it appeared to take a while to adjust. Anna Westerlund had an early shot blocked before Jamie Finn cleared off the line.

Ireland’s press, however, began to disrupt the visitors’ attacking play but their decision-making in the final third was letting them down. Megan Campbell sent a wayward cross over the bar before Heather Payne chose to go solo with options and ran out of room. The hosts were fashioning chances and could have taken the lead. Louise Quinn’s header off a trademark Campbell throw was deflected vitally wide before Katie McCabe had a series of shots blocked. Finland had their opportunities too and Courtney Brosnan was called upon to make a stunning save off a Linda Sällström effort.

Ireland were dealt a blow when the tireless Ruesha Littlejohn had to withdraw through injury. Lily Agg, having made her debut back in June, came on for the most important international game of her career. She slotted into the midfield seemlessly, putting in a player of the match worthy performance alongside Denise O’Sullivan and Jess Ziu.

Ireland looked more defensively at home in the second half after a slight tactical shift that allowed O’Sullivan to get closer to the opposition box. Diane Caldwell tested the reflexes of Tinja-Riikke Korpela early on before Olga Ahtinen called Brosnan into action down the other end. 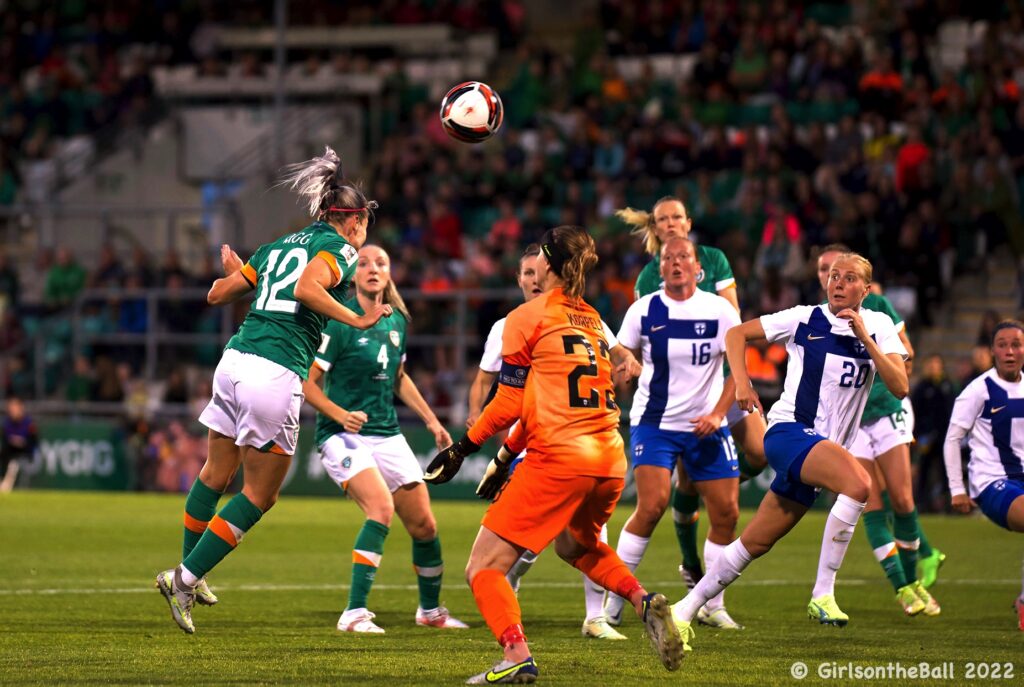 The all-important breakthrough came in the 54th minute when Emma Koivisto was penalised for a hefty challenge on Katie McCabe. Connolly swung in a free kick towards Agg who leapt bravely to head brilliantly past Korpela. Pauw was full of plaudits for a player who had stepped up when needed. “The way that she [Agg] came on is unbelievable,” she said. “But Lily’s timing [at headers] is so good that even though she’s not that tall, we completely trust her to take up that role.”

Finland endeavoured to fight their way back into the match but time and time again came up against an Irish wall. After a nervy four minutes of injury time, in which Finland had a goal disallowed for handball, the celebrations could properly break out. A special moment for a very special group of players.

Slovakia await in the final group match where there is the possibility of Ireland being seeded directly into Round 2. They will need other results to go their way but there is still plenty to play for as this qualification campaign draws to a close.