It was a night beyond any England fans’ imaginations. Sitting in the stadium, soaking in the atmosphere after the final whistle, it was hard not be filled with wonder about what we had just witnessed. For Sarina Wiegman and her Lionesses had just produced one of the most stunning performances in the competition to sweep aside a nation that will have been considered one of the strongest.

Wiegman herself seemed equally surprised as she arrived in a buoyant post-match press conference. Meeting journalists with her dry sense of humour, she joked that she could be “satisfied” with the performance when asked if England had been ruthless enough for her.

In the build up to the game, everyone had been talking about the Norwegian attacking threat – the likes of Ada Hegerberg, Caroline Graham Hansen, and Guro Reiten; names that would terrify any defence. It it widely known that Norway’s defence is their weak point but the danger of their forwards goes some way to nullifying that.

There had been some whispers about England from their edgy win against Austria in the opener and they seemed determined from the off to put that firmly to bed. We have seen some incredible attacking performances already this tournament – Germany, Spain and France come immediately to mind – but the Lionesses were about to blow those out of the water. For what followed was a 90 minute masterclass in how to defend from the front, utilise your width to the maximum, and pummel an opponent until they have nothing left.

To some people’s surprise, Wiegman named an unchanged side to those that started at Old Trafford five days previous. Opting for the less cautious version of her team, it was a statement in itself that she had every confidence in their defensive ability. 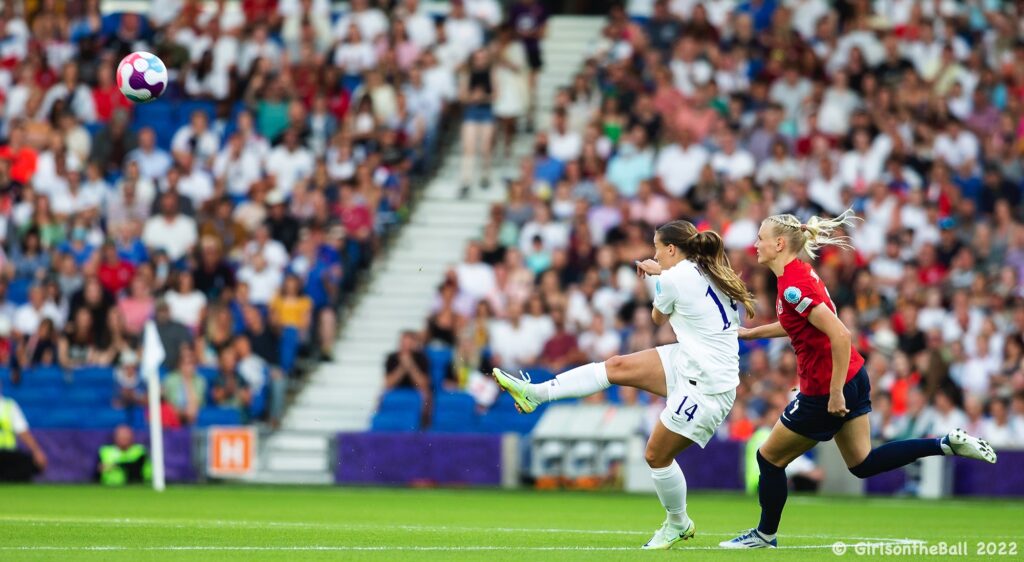 The opening ten minutes were a little edgy as England felt their way into the game in front of a raucous Brighton crowd. One of this side’s qualities under Wiegman’s stewardship, however, is their ability to remain calm and manage the game. After an initial flurry from Norway, Millie Bright and Leah Williamson began to string the passes together along the back line to take the sting out of the threat, while Fran Kirby was popping up in visible pockets of space to exploit.

England were targeting Norway’s left hand side, the weaker of the two, with Beth Mead and Lucy Bronze running rings around Julie Blakstad. The more the Norwegians continued to leave their left back stranded, the more England grew into the game. Bronze produced her best perfomance in an England shirt since 2019 while Beth Mead illustrated why she is undroppable this season.

The Lionesses were helped by an early goal to stamp their mark on the match. As Kirby fed the ball through to Ellen White, the forward grappled with Maria Thorisdottir before going down a little dramatically. There was contact so VAR would not overturn the referee’s decision but it was a soft penalty. There was nothing soft, however, about Georgia Stanway’s conversion as she hammered the ball past Guro Pettersen. The goalkeeper picked the right way but the power on the shot was so that she had no chance.

Three minutes later, England were two up, hitting their opposition with a sucker punch. Mead broke into acres of space down the right to deliver in one of the many pinpoint crosses she would produce all evening. Lauren Hemp raced to turn it home at the far post and initially thought she had been denied by the assistant’s flag. VAR intervened this time and correctly award the England youngster her first goal in a European Championships. 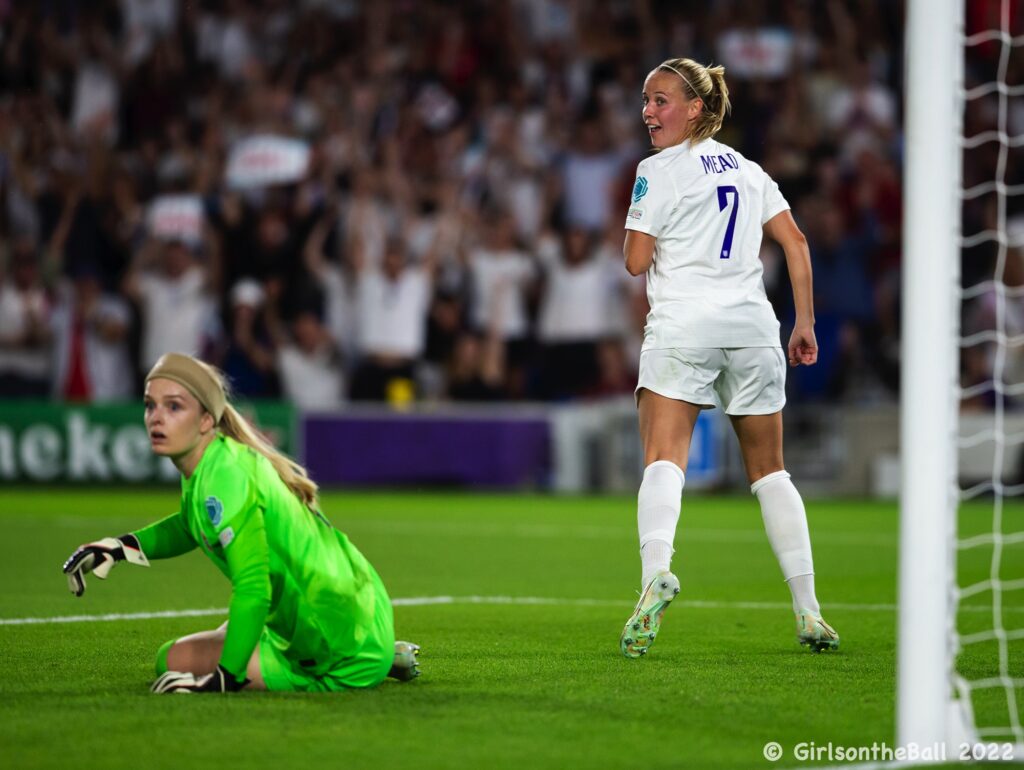 The Lionesses were purring at this point. Defending from the front, the intensity of the press of White, Mead, Kirby and Hemp took the pressure off England further down the field. Meanwhile, Bright stuck to Hegerberg like glue while Williamson was at her very best marshalling the back line. The third goal came from the high press, Kirby and White combining to rob Thorisdottir before the latter broke into the box and fired home. Mead got in on the act with two – the first, a fabulous header off a Hemp cross; the second, a brilliant mazy run to beat two defenders in the box before converting. It was an inspired performance from the Arsenal winger. White added one more to add to the rout just before the break, turning home a fabulous Kirby cross to take her one goal behind Wayne Rooney in the all-time scorer charts. It won’t be long before that record falls as well.

Norway were shell-shocked, as was everyone in the crowd. Martin Sjögren finally made a change at the break, switching to five at the back, but by that time the damage was more than done. England continue to press and harass his Norwegian players and two more goals were added. Alessia Russo, on for White, leapt high to head home her first ever tournament goal before Mead rounded off a brilliant night by completing her hat-trick.

It was a performance for the ages, one of the best an England side has ever produced. As Sweet Caroline echoed around the Amex, the England players and their manager rightly celebrated an emphatic victory that sees them qualify for the quarter-finals at the top of Group A. Northern Ireland await in the final group game, to all intents and purposes a dead rubber now, but there will be no letting their foot off the gas as the Lionesses look to continue their momentum into the next round.