Under the guidance of Gemma Davies, England’s U19s will get their European Championships campaign underway on Monday afternoon in Ostrava. Manchester United’s Tara Bourne is one the strong 20-player squad that is brimming with potential from back to front. We caught up with the Young Lioness ahead of a big summer:

How are have you and the team settled into camp ahead of these European Championships?

TB: I’m really excited. We’ve been here for a few days now. We’ve got used to the weather because it is quite hot compared to England. We’ve got a few sessions in and we’re looking really sharp. We just can’t wait to get going.

As an age group, you missed out on on international football for a little while. How much are you looking forward to taking up this opportunity and representing England?

TB: It’s our first major tournament and we can’t wait for the challenge. It’s going to be so hard but we’re so ready for it. And our qualifying campaign has been tough as it is. So, that’s only made us even better and stronger as a team so we can’t wait to get going now.

For you personally, you spent the last part of the season at Blackburn. How do you feel that that experience has readied you for football this summer?

TB: Amazingly. Obviously at Manchester United, it’s more of a technical game. At Blackburn, I learnt the out-of-possession side a lot more, which really helped me to bring different parts of it to my game. I was able to improve in different areas which I hadn’t been able to or wasn’t exposed to as much. It’s helped me a lot and I’m really looking forward to taking that and implementing that into country football now.

As a group, obviously, you’ve got a collection of players from different clubs and some play abroad as well. How do you work on that cohesion and team bonding?

TB: It’s tough coming from different styles of football but when we come together, we communicate so well as a team on and off the pitch. It’s little conversations that need to be had at the right times, and we’re so good at doing that. So it’s so easy to communicate. It’s a simple conversation and we click easily anyway. So, in training and off the pitch, we’re doing really well at stuff like that. 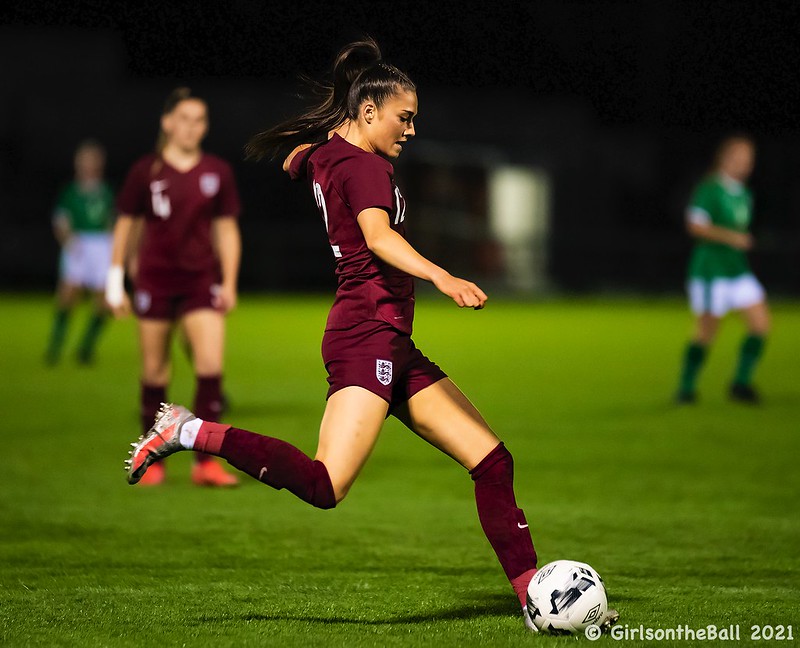 Tournament football is a different beast in terms of you’re away from home and you’re together for a significant period of time. What do you get up to when you get off time because there’s a lot of spare time beyond the training and the play on the field?

TB: Of course. You have to know when to wind down because we have a very energetic group that get on really well so sometimes it’s tough to tell them when to wind down. But we love playing cards and chilling. A lot of us read so we love doing that. Pool, table tennis – we find every activity we can play; we make up games if we have to do.

What do you think we can expect of this England team?

TB: A really exciting team. We’re very attacking. We love to go forward and play exciting football. At the end of the day, people watch football to be entertained and that’s what we want to do for you guys – to entertain and to promote the women’s game. We’re excited to show you what we’ve been doing.

You get to test yourself as a group and personally against some of the the best nations in Europe at this age group. What do you think of the tests you’ve got in your groups?

TB: Obviously, it’s going to be hard. Previously, we’ve come up against hard opposition but that’s only made us stronger and more together. We’re excited for the challenge and most of us have said that to each other. These games mean something and it’s performing under that pressure. That’s probably what we’re most excited about – seeing how far we can go and testing ourselves.

Finally, an eye on the seniors. Obviously, it’s a really exciting time for English football and football in general. Do you feel connected to that group of players and will you be cheering them on all the way?