Reading’s unbeaten run continued on Sunday after they completed a remarkable comeback against relegation-threatened Birmingham City.

After a rough start to the season, Kelly Chambers’ Royals are flying, brimming with confidence. There was just one change to the side that had beaten Leicester, with Faye Bryson returning to right back.

In Birmingham, however, they faced an opponent that have shown signs of fight in recent weeks. Darren Carter made no changes to the side that had fallen to Manchester United the previous weekend with Jade Pennock and Libby Smith the front pair in a 3-5-2 formation.

The visitors started knowing that every point is vital in this relegation battle. They took the game to an off-colour Reading from the first whistle, breaking with purpose and threatening with deliveries from the wide areas. They were perhaps helped by the hosts’ starting formation that surprisingly saw Deanne Rose sitting in the hole behind Natasha Dowie and Emma Harries, stifling the blistering pace which is one of her strongest assets.

For the first half an hour, Reading struggled to mount any response. Birmingham flooded the midfield area with Veatriki Sarri and Lucy Quinn both making surging runs. With three minutes on the clock, Birmingham took advantage. Gemma Lawley buried a Lucy Quinn delivery past the stretching Grace Moloney. The visitors’ second came in the 36th minute when Pennock bravely latched onto Smith’s perfectly weighted through ball to slot past the onrushing keeper.

A long pause followed with a worrying injury to Moloney needing substantial care. While the physios saw to her on the field, Chambers gathered her squad, quite clearly conveying her displeasure at what she had witnessed. After an eight-minute wait, Moloney was carried off the pitch on a stretcher, thankfully to be home again that evening and recovering well. 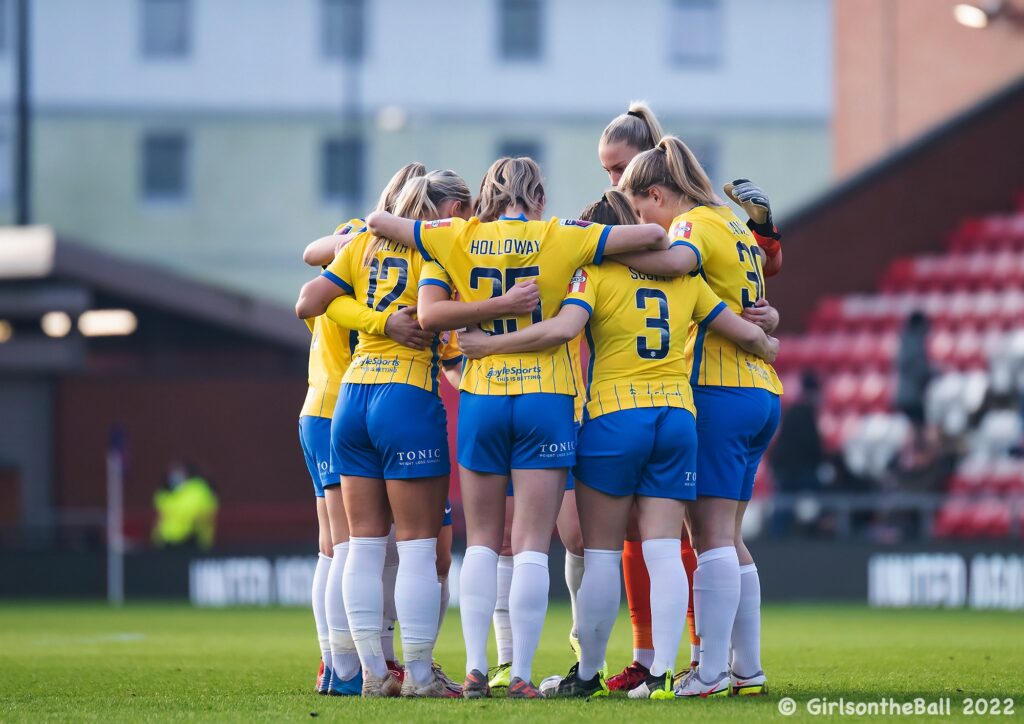 Whatever Chambers had said seemed to spark the Royals into action. Deep into injury time they pulled a goal back with Justine Vanhaevermaet leaping high to convert a Lily Woodham free kick.

Aided by a slight tactical switch – Rose had returned to her normal position out on the left – the hosts levelled the score three minutes after the restart. Harries broke into the box and was bundled over clumsily by Harriet Scott. Tash Dowie stepped up to dispatch the subsequent spot kick.

The momentum had switched, and before long Reading were in front. It was best goal of the match – Vanhaevermaet started a flowing move out to Rose down the left; her cross found Harries who adjusted her body perfectly to volley home. The young Reading Academy graduate has been one of the breakout stars of this campaign with her manager now predicting a bright future: “She has always been someone who has wanted to be the best version of herself on the pitch, constantly looking at ways to improve…I said to her after the game, her performances are outstanding; and if she keeps going, she is going be unplayable.”

Carter cut an irritated figure in the Birmingham technical area, knowing they had allowed the game to slip away. They battled to the very end but were mentally beaten by those two goals either side of half-time: “We’ve got to manage that period before half-time, where we’ve got control of the game, a lot better and not give the opposition any impetus.” Despite his frustrations, the positive will be that Leicester failed to take advantage against Aston Villa, leaving the relegation fight as it was before Sunday’s action.

For Reading, however, things couldn’t be brighter. Seven games unbeaten and 90 minutes that showed all their character, resilience, and confidence. It has been said many times how tight this group of players are and that togetherness shines on and off the pitch. As Chambers remarked post-match: “The mental strength is what the group have got at the minute – they are a bunch of winners and show it every single day on the training pitch, fighting for one another.”