Manchester City progressed to the quarterfinals of the Continental Cup with a dominant victory over Leicester City.

Gareth Taylor was able to put out a strong City side at the Pirelli Stadium. Caroline Weir and Bunny Shaw were still out, but Steph Houghton and Lucy Bronze were able to get more minutes under their belt in their return to full fitness. There was a last-minute change in goal when England youngster Khiara Keating replaced Karima Taieb, who picked up a knock in the warmup.

As hinted in post-match at the weekend, Leicester’s manager, Lydia Bedford, rang the changes over her side. She handed out five debuts to young Academy graduates for the experience. The fight to stay in the Barclays FAWSL is the priority this season so Jess Camwell, Ava Barker, Alanta Brown, and Monique Robinson were all given a run out.

“That’s a great opportunity for our young players to experience. They’ve had a look in to what it looks and feels like to be a top professional player…what was really pleasing is that they really tried to go toe-to-toe with those players”

The visitors were in control from the first whistle with Jess Park and Lauren Hemp enjoying lots of space to run into down the flanks. One such run from Park set up Ellen White for the opening goal, heading home within nine minutes.

The chances kept coming for City who found their second goal in the 15th minute. Park once again showed pace to beat Jemma Purfield down the right. Her looping cross was pinpoint for Hemp to head past Sophie Harris in the Leicester goal. A minute later, it was three – Park with her third assist of the night laid the ball off to Stanway to bury from distance.

Leicester managed to regroup and shore up defensively despite continued Manchester City pressure. Harris did well to tip Park’s angled effort over the bar before keeping out a diving White header. The visitors did, however, find a fourth. Hemp headed home her second of the evening after strong work from Bronze down the right. 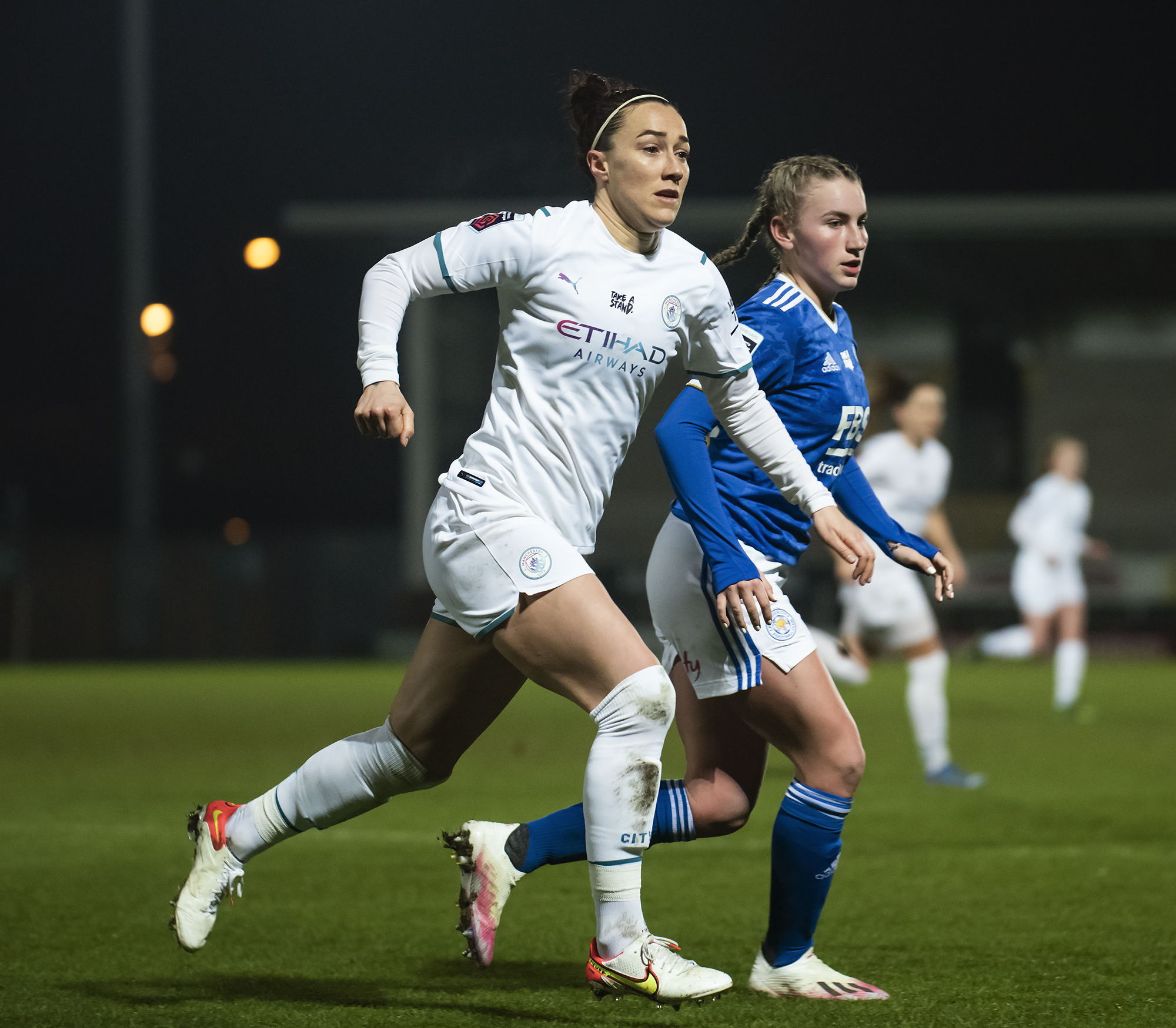 There was still time for City to hit the bar twice before the break – Houghton from a trademark free kick and Hemp with another header. They went in at half-time in full control and with the quarterfinal spot all but sealed.

Taylor gave Bronze and Hemp a rest, bringing on Janine Beckie and Demi Stokes at the start of the second half. Within three minutes, they had added to their tally when Losada was afforded a tonne of space to curl an effort home from about 35 yards.

The hosts rallied and were presented with their best chance of the evening when Robinson broke through the City defence at pace. Stanway, however, chased after her and the Leicester youngster opted to go down under pressure. The referee, Amy Fearn, correctly waved the subsequent penalty shout away.

With the game won, City lifted their foot off the gas but still produced chances. Harris was called into action again to deny White and then Filippa Angeldahl from a one-on-one situation.

Taylor was pleased with his side’s showing after a busy return from the winter break: “Really pleased. Job done. We could have arguably settled this in the group stages. I thought the way the players handled the game tonight was really good. I thought it was really professional.” Manchester City will now face Bristol City in next week’s quarterfinals.