As we reflect back on 2021, the return of youth-level football on an international stage has to be one of the highlights.  With tournaments cancelled for over a year due to coronavirus, football federations have had to play catch up as a generation of young footballers missed out on the traditional pathways to develop their trade.

In England, the U17s and U19s are already back on the international circuit, competing successfully in qualifiers in the autumn to go through to the next round in their respective tournaments. However, there was a big question mark around the age group above. Players – the 2002 generation now too old to play U19 football – had missed out on 18 months of competition that provides a strong development stepping-stone. Equally, those a little older and on the edge of the seniors need a place to be able to showcase and hone their skills.

It’s important that we’re trying to give players opportunities. We’ve got a mix of older players, who have been through the pathway and played in every age group; but we’ve got some younger players, as I say, who because of COVID didn’t have the opportunity for the European Championships…That’s the purpose of the programme to give them a chance to prepare them better for the future really.

With the arrival of Sarina Wiegman as the new Lionesses’ manager, a solution has been developed and the U23s created. As Kay Cossington [the FA’s Head of Women’s technical] explained back in October, “Sarina and her staff want to bridge the gap between the age groups and the seniors and after 18 months of limited international football in the women’s game, we can start to make up for lost opportunities.”

Persuading Mo Marley, one of the best youth coaches in the game, out of retirement has been another coup for the FA. Overseeing the U23s on a consultancy basis, she has extensive knowledge of the pathway and players, and joins Wiegman and the senior technical staff’s weekly meetings: “[Sarina] believes it’s integral that I’m in their weekly meetings all the time from a senior perspective so I can see assessments – player assessments; senior player assessments; youth player assessments. We’re all abreast with what’s actually happening so it’s great. And it’s great to just be exposed to different thinking and shared experiences.”

After beating Belgium 1-0 last month, England’s U23s took on Estonia at St. George’s Park on Tuesday afternoon. It is a team packed with talent combining the best players from multiple age groups and many who have been making a name for themselves domestically here and abroad over the last couple of seasons.

Anna Patten partnered Everton’s Gabby George at centre back. The Arsenal player was handed the armband for the match, an incredibly proud moment in front of her watching family: “A great honour. It means a lot. My parents were here. So, it’s so nice to wear it and sing the national anthem loud and proud.” In the middle of the park, Mel Filis sat deeper with Missy-Bo Kearns and Ruby Grant ahead of her to try and exploit the low block presented by Estonia. Emma Harries, the in-form Reading forward, led the line. 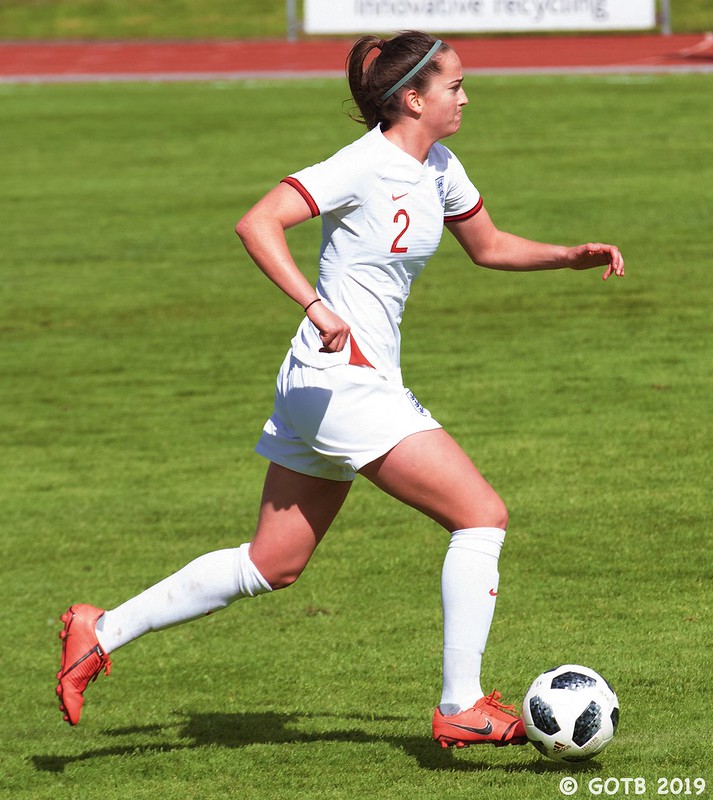 You could see what England were trying to do from the off. They were moving the ball around incisively, with Kearns and Grant pivotal to their forward movement, but struggled to create clear cut chances in the opening stages. That all changed when, in the 20th minute, Kearns produced a sublime reverse pass to set Harries away to break the deadlock.

The roles reversed for England’s second, with Harries setting up Kearns in the box to finish clinically past Getriin Strigin. George soon added a third, heading home a Taylor Hinds’ corner before Kearns added another before half-time.

Five minutes after the break, Kearns sealed her hat-trick after breaking through the Estonian defence. Grant then got in on the act with England’s 6th and 7th of the afternoon – her second strike a delightfully deft finish off Ebony Salmon’s pass. Substitute, Katie Robinson, added another from 20 yards out before Grant sealed her hat-trick. Hinds also got two of her own on an afternoon that showcased the Young Lionesses’ attacking potential. 11-0 was the final score.

Marley was pleased with what her side had shown throughout the game: “We’ve spent all week trying to work through how we work collectively in the final third and there’s so many good things that have come from that…Obviously, it’s hard against a team that plays a lower block; it’s really difficult. That’s what we’ve struggled with in the past with our youth teams. But I thought they were patient and diligent with what with asked them to do today.”

It was a successful end to a positive camp for this next generation of England players. Over the last week, England’s U23s have been training at St. George’s Park whilst the Lionesses were there. The seniors have been to watch their training alongside Wiegman giving the Young Lionesses a boost. The more visible and attainable that pathway feels, the better as they continue their development. As Patten said post-match: “I think it does mean a lot for all of us…they say they’re always watching, but you never really know until you have opportunities like this to be brought in. And obviously to work with Mo again; I think she’s one of the best coaches there is to bridge that gap…She’s got a good relationship with the technical staff, with the seniors, so she can just really bring all that information that they’ve been coaching to us.”