“I love the group stage. Such a great idea. It was so needed, and it’s really helped. I think it will help every team and develop the pool of quality teams across Europe.”

As the Champions League returned for its final two match days in the Group stage, Chelsea manager, Emma Hayes, made a ringing endorsement for the competition’s new format. Drama, high quality football, big stadia, increased visibility and much more – the Champions League Group Stage has had it all. As the final games of this new addition come to an end, it seems as good a time as any to reflect on what a brilliant adaptation it has been.

It was exemplified no more than by the two games that were played on the opposite sides of London last week. On Wednesday night, Juventus showed grit and determination to earn a valuable point against Hayes’ high-flying Chelsea side. It had been noted that they celebrated the draw like it was a Cup Final and they had every right to do so. It put Joe Montemurro and his team on the brink of qualification which they duly sealed this week with a win over Servette. They now progress to the quarterfinals for the first time, demonstrating their upward development on the European stage.

Then on Thursday, the European Champions, Barcelona, came to town. They produced a display in front of 12,000 at the Emirates that illustrated exactly why they are the best team in the world at this moment in time. Even against an improved Arsenal performance, they ran circles around the Barclays FAWSL league leaders, sucking the life out of them with a mere 733 completed passes to the Gunners’ 226. It was a demonstration of the level that all teams involved in the competition need to aspire too and reach.

And yet, in spite of Barcelona’s dominance, it absolutely showed (along with the other group games) the benefits that this round of matches is having on all the teams involved. 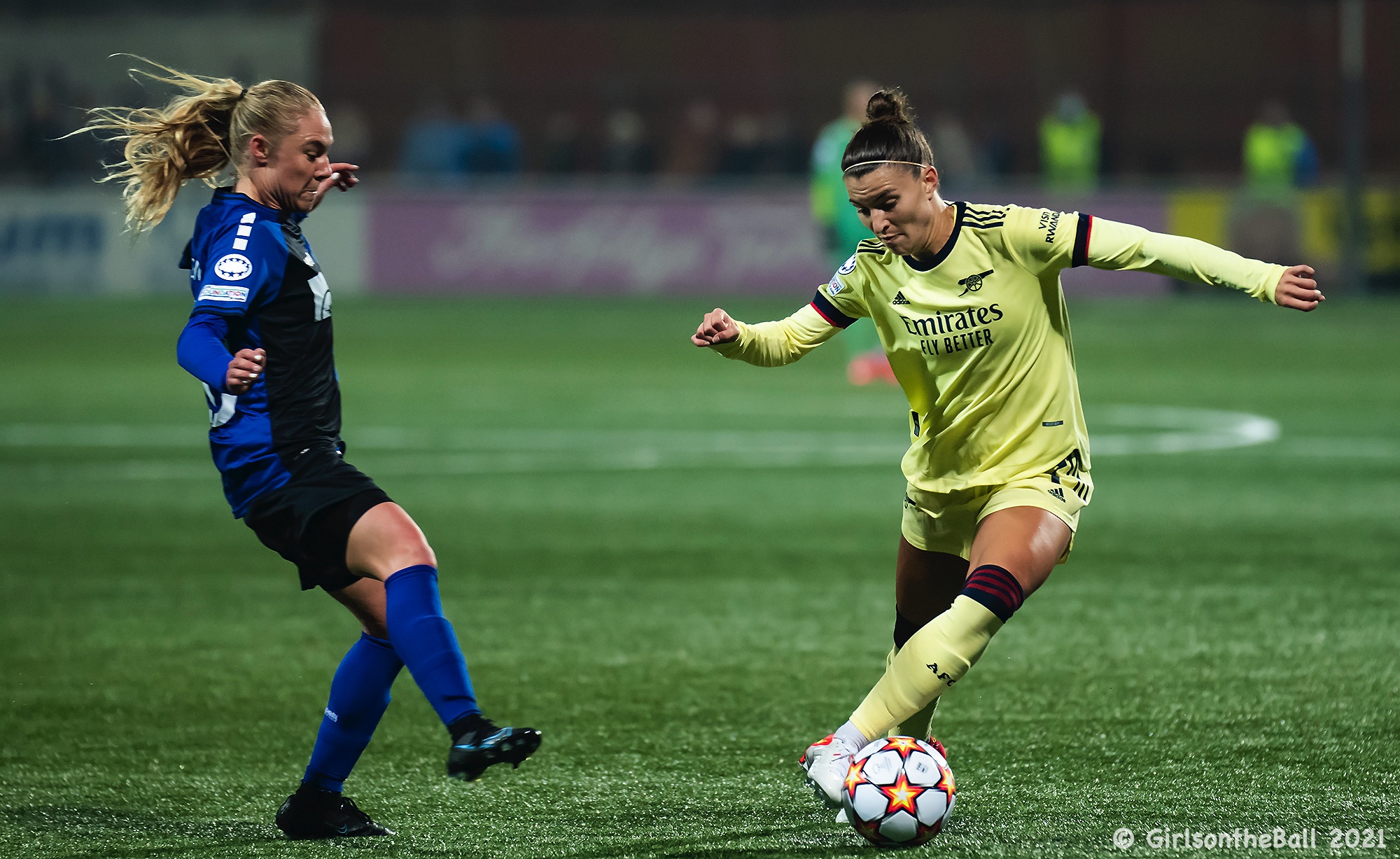 Firstly, a wider set of teams across Europe are now being exposed to the highest level, something that you would have probably only previously encountered if you were lucky to reach the semi-finals or finals of the competition. Looking at the English teams, Chelsea had tough tests against Juventus and their nemesis, Wolfsburg, that eventually saw them crash out of the competition. Arsenal played Barcelona twice, two fixtures that have provided a massive learning curve.  Even in defeat, Jonas Eidevall could see the progress in his team from the away leg, whist also realising what they needed to develop in the future: “When you haven’t been exposed to that [Barcelona’s style] before, it just comes like a shock. That was what happened to us the first time. So, this time, we knew what would be waiting for us and we actually did it a little bit better. But if we want to take it to another level, we need to work with it in practice. We need to design training exercises and everything in order to be exposed to that as often as possible to be able to handle less time and space.” The Gunners also played two entertaining fixtures against Hoffenheim, the second of which (a 4-1 defeat) will have given them a massive reality check. It was a sign that the English teams have a lot more work to do to achieve success in this competition.

With four groups of four, every side at this stage was guaranteed six games of European football, rather than two in previous years. This exposed them to multiple different styles and standards of play. For the likes of Servette and HB Køge, this will both serve to progress their experience and development on the European stage and, given time, should also filter down to have a positive impact on their domestic leagues. For example, the way Servette came to Kingsmeadow to grind out a 1-0 loss, having been beaten convincingly by Hayes’ side just seven days earlier, showed a developed understanding of the task in front of them. It is no longer a flash in the pan situation. They, and others, will be back in the competition next year all the better for the experience.

Across the groups, games were played in major stadia with attendances showing the increasing appetite for the sport across the continent. 16,781 turned out to watch Juventus host Chelsea in Turin whereas Servette set a new personal record with over 12,000 coming to watch their side take on the Blues at the Stade de Genève. PSG had 18,344 fans come to see them take on Real Madrid, while Arsenal attracted 12,000 to the Emirates to see them take on Barcelona. These numbers are not to be sniffed at. The sport is developing and becoming more and more a product that people want to consume. 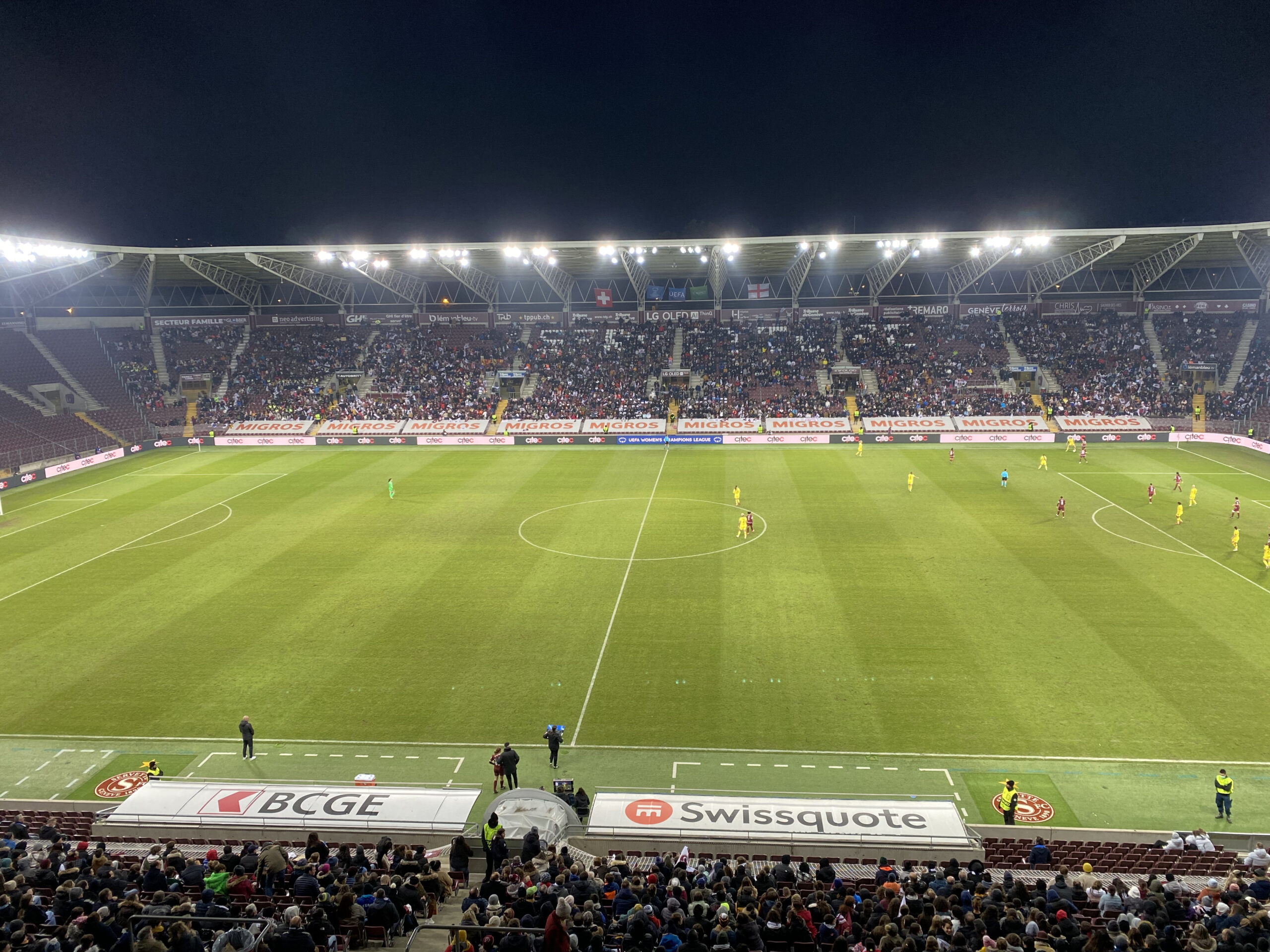 The increased visibility in the stadia was matched, if not surpassed, by the live-streaming service provided by DAZN. As of the 16th November, the UWCL streams had attracted over 5 million viewers, 85% of which weren’t already subscribed to their YouTube Channel (www.sportspromedia.com/news/youtube-dazn-wucl-audience-ratings/). It just goes to show that the appetite is absolutely there and making a sport easily accessible can have wide-ranging benefits.

All of these points will help to raises standards across the board. Domestic leagues will improve with increased exposure and investment, and the UWCL is a chance to shine a light on those teams at the very top of domestic European football. Year One of the group stage has provided some scintillating football. The experience gained from it and the growing visibility of talent will only serve to increase knowledge and interest for years to come.