FAWNL Division 1 | Match Day 10 Round Up

Match day 10 of the FAWNL Division 1 got underway on Sunday 31st October with matches hampered a little by bad weather.

Read all about the action in the Division 1 here:

Liverpool Feds moved to the top of the table on Sunday as their unbeaten run continued.

The hosts were ahead within 10 minutes when Paige Cole chipped the opposition keeper. Chester le Street responded immediately, however, with Elizabeth Thompson-Clarke levelling the score.

But four goals in the 15 minutes before the break saw Liverpool Feds open up the gap between them and their opponents. Erin Slade gave them back the lead before Cole hit again. Ellie Stewart then headed home a free kick and Ellie Fletcher added another just before half-time.

A quieter second period ensued with no goals added until the final minute. Slade added her second of the game to cap off an emphatic Feds’ victory.

Norton leap-frogged their nearest rivals to fourth in the table as they edge past Bradford City.

It was the visitors who took the lead with 20 minutes on the clock when Sophie Hawkins pounced on a mistake. But Norton rallied and levelled when Sophie Tierney turned home Lily Patrick’s corner.

The winner came mid-way through the second half. The in-form Bianca Owens was on hand, as per usual, to fire home after good work from Patrick. 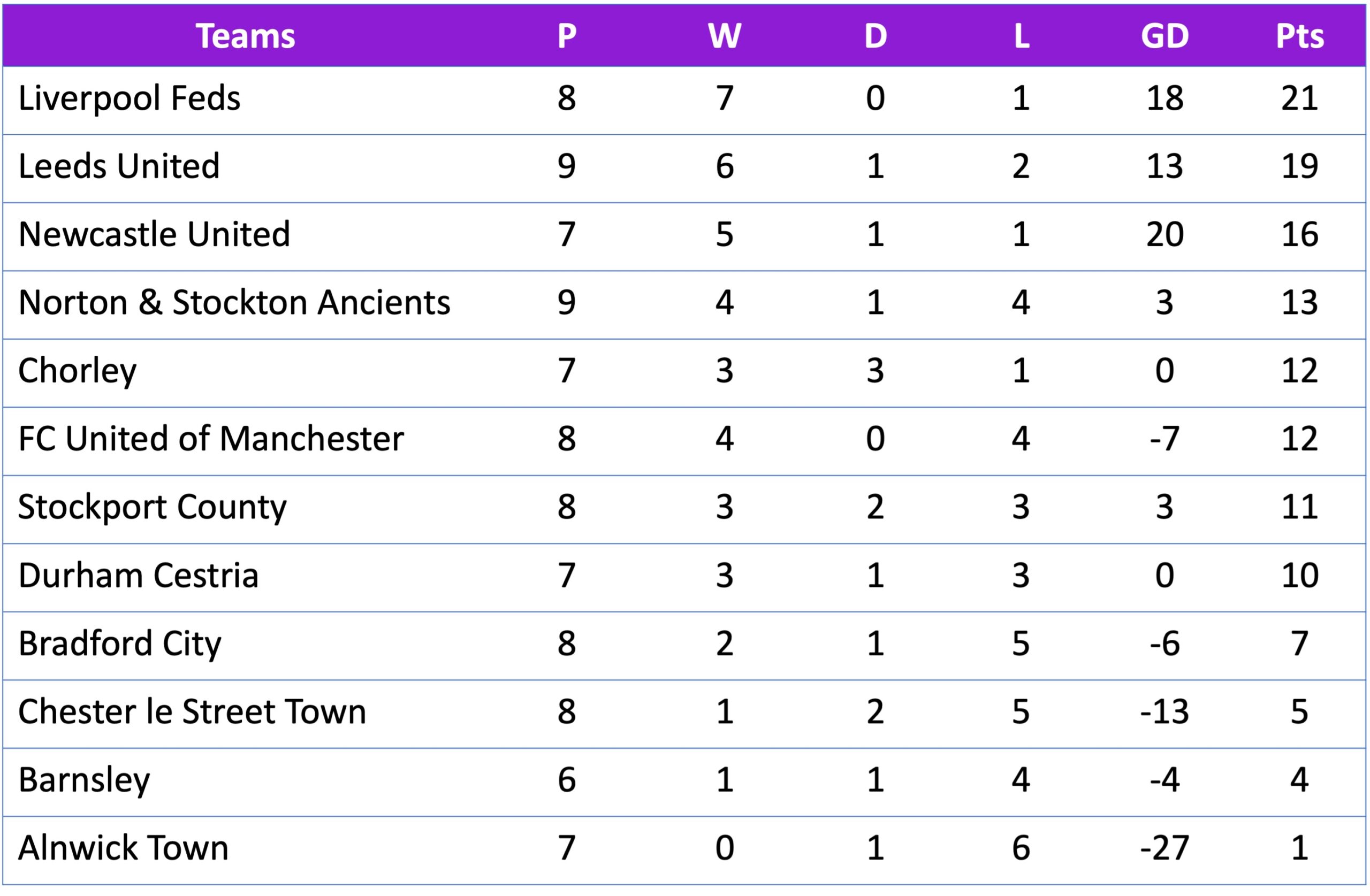 Lincoln City maintained their lead at the top of the table as they held off Bedworth United.

The visitors took the lead after 40 minutes as Jeorgia Carr converted after a good counterattack. They then doubled the score in first half injury time after a foul in the box. Toni McHamilton stepped up to coolly dispatch the spot kick.

Bedworth pulled a goal back early in the second period when Abbie Taylor powered home a superb strike from distance. But they could not find another as Lincoln held onto another valuable victory.

Boldmere St. Michaels kept up the chase on Lincoln with a narrow victory over Doncaster Belles.

Tanya Dickinson scored the only goal of the game after 15 minutes to ensure the three points stayed in Sutton Coldfield.

Sporting Khalsa earned their fourth win on the trot after seeing of Burton Albion on Sunday.

Laura Smith scored her first goal of the season for visitors in the first half, heading home a cross from Chloe Handy.

Burton equalised shortly after the break when Ella Ritchie pounced on a defensive error. But Rebecca Gill-Parsons found the winner for Khalsa with 25 minutes left to play.

Solihull got off to the perfect start when Charlotte Leedham hit the back of the net.

But the visitors responded in style with four goals before the break and two more in the second half. 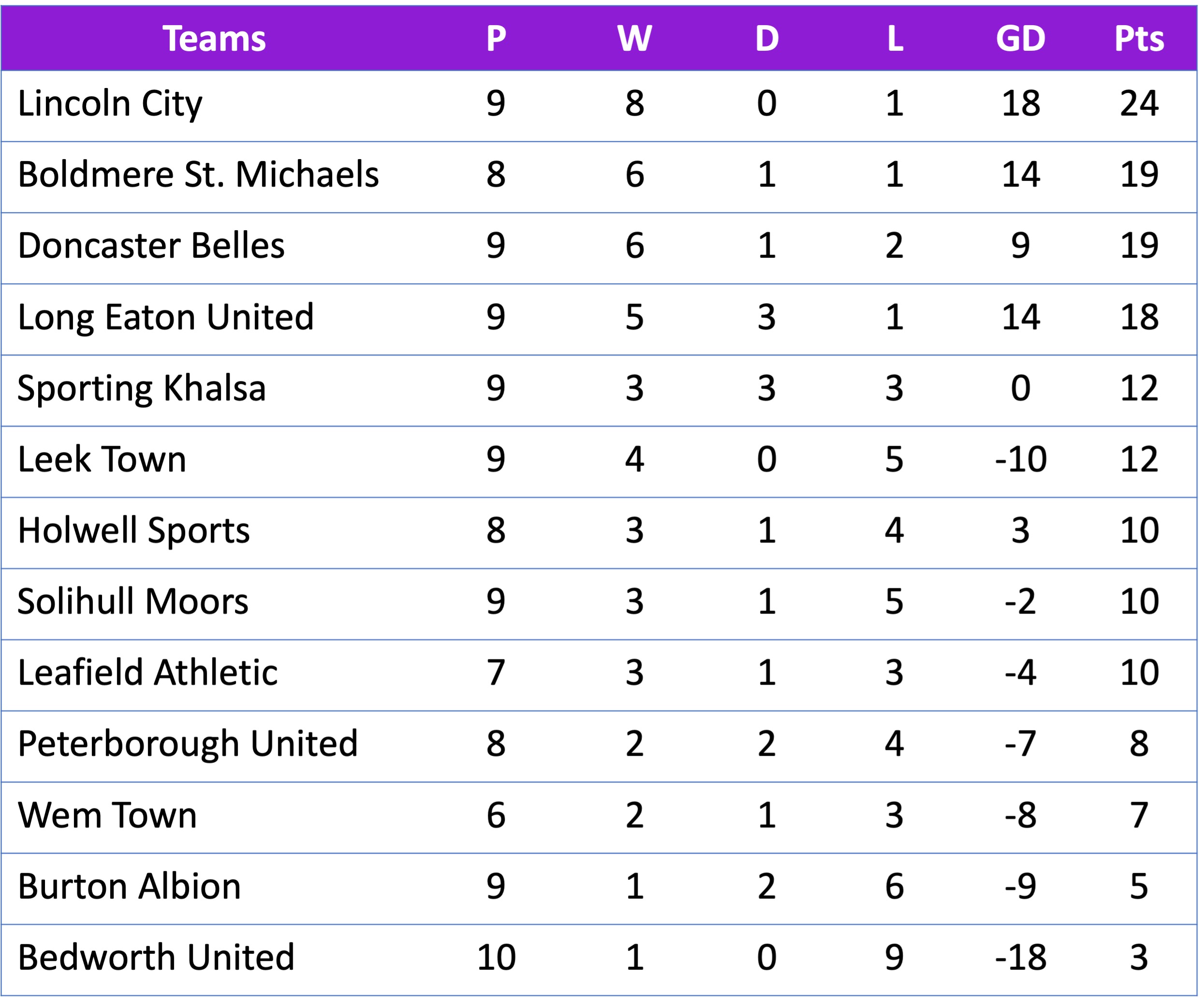 Kent Football United earned their first point of the season as they held Actonians to a draw on Sunday afternoon.

After a tight battle, it was the visitors who took the lead in the 78th minute through Lucy Cockerill. But Actonians rallied and found a leveller shortly after. Rhiannon Ishmael got on the end of a Greta Humphries’ corner to ensure her side got a point.

Logan O’Shea fired her side into the lead with 30 minutes on the clock. Zoe Rushen added another shortly after to double the hosts’ score before the break.

Rushen scored her second mid-way through the second half before O’Shea sealed a brace for herself. Karissa Rodney rounded off the scoring in the 82nd minute.

Enfield Town held off a Cambridge City come back to earn a narrow victory at the Queen Elizabeth Stadium.

The hosts took just two minutes to get on the scoresheet when Klesha Darroux turned home Danielle Smith’s cross. Before long, it was two with Mollie Kmita powering home a rebound. Darroux added her second of the game five minutes later, rounding the keeper to finish. The visitors did pull a goal back just before the break.

Che Thomas extended Enfield’s lead early in the second half before Cambridge mounted a mini comeback. They scored twice in the remaining half an hour but couldn’t find a leveller to share the spoils.

Cambridge United got back to winning ways in the league with a solid victory over Norwich City.

Laura Mitchell gave the visitors the lead just before half-time. Ruth Fox then doubled their lead in the second period to ensure they took home all three points.

Stevenage fought back from 2-0 down to earn a point against London Seaward.

Abbey Dell and Phoebie Eshen fired the visitors into the lead. But Stevenage rallied and earned a point through goals from Ronni Harrison and Shianne Swarres. 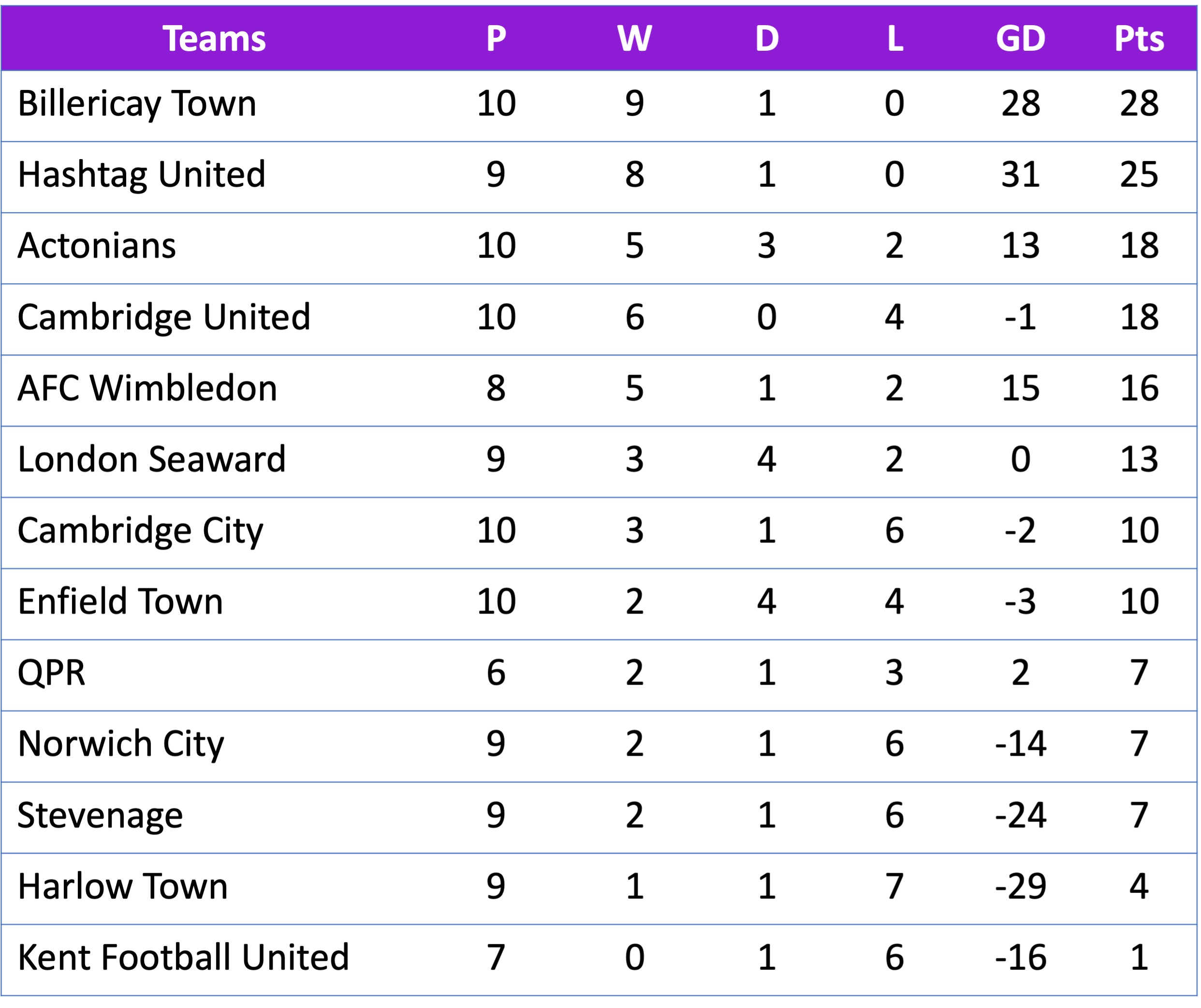 In the only surviving game on Sunday, Poole Town earned their first point of the season against Larkhall Athletic.

Rhian Robbins fired the visitors into the lead. But Poole Town returned just before the break through an Emma Acott strike. 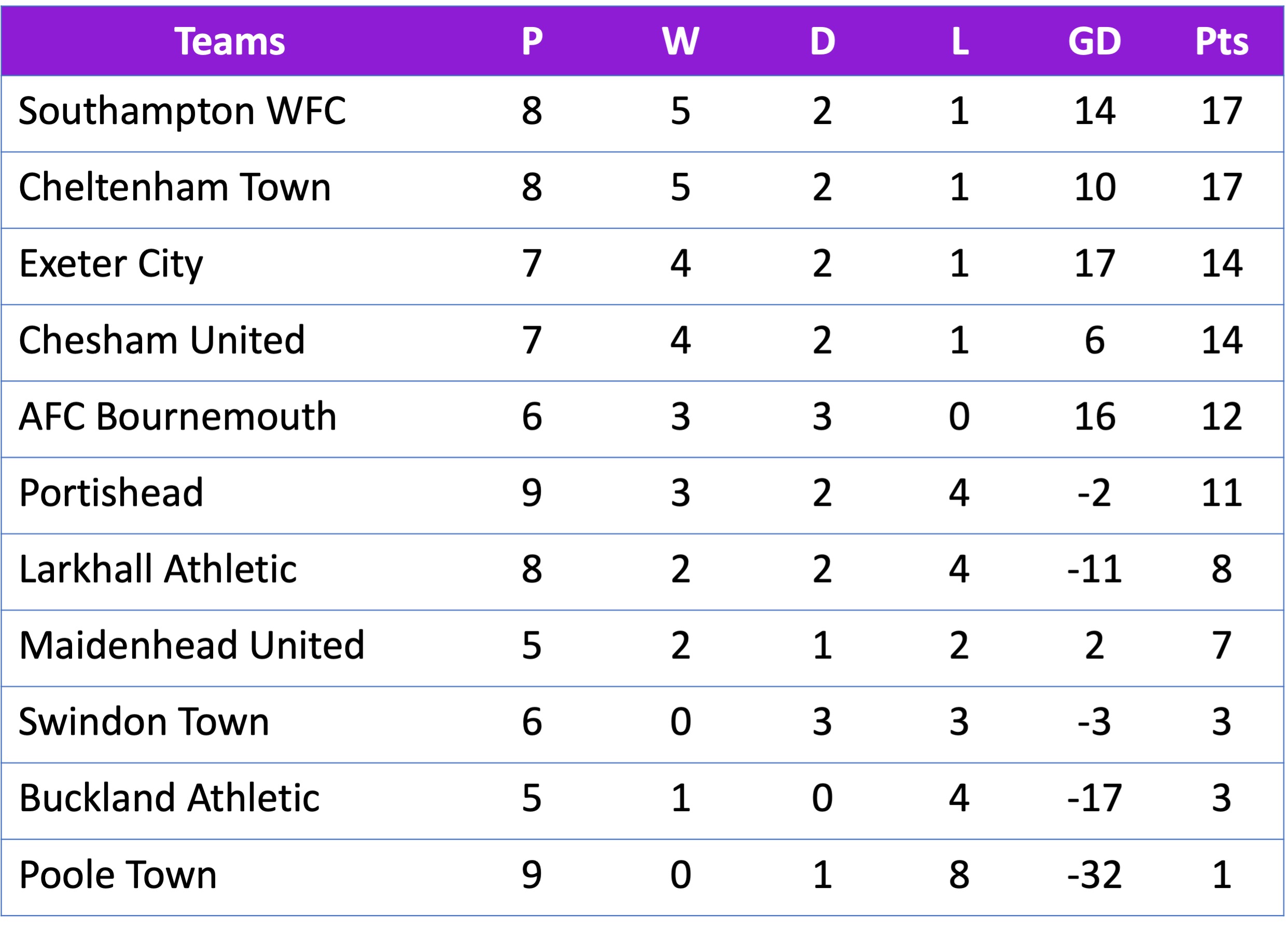