Improving Ireland edged out by Sweden

After their first game against Georgia was postponed in September, Ireland opened their long-awaited FIFAWWC qualification campaign to Sweden on a chilly October night in Tallaght, Dublin. The home side put on a strong defensive display against the Olympic silver medallists and second ranked team in the world, but ultimately fell to a 1-0 defeat due to an unfortunate own goal from Louise Quinn.

Ireland went into the game buoyed by their win against Australia in a recent friendly and were determined to give the Swedes a difficult day out. They knew the challenge that lay ahead and from the pre-match media coverage, it was clear they were relishing the clash, testing themselves against the best.

“We want to really make their day very hard and do what we’re good at and maybe get in their faces.”

Vera Pauw’s side lined up in a 3-4-3 formation with Courtney Brosnan between the sticks and captain Katie McCabe starting up front with Lucy Quinn and Heather Payne. In contrast, Sweden lined out in a 4-3-3 formation, with Eriksson wearing the captain’s armband in Seger’s absence and taking her place in central defence. A team bursting with quality with the likes of Stina Blackstenius, Fridolina Rolfö and Hanna Bennison to name a few, we knew we were in for a night of good football.

As expected, it was the visitors who started on the front foot and Brosnan had to be alert from the get-go with a couple of early chances through Lina Hurtig, Sofia Jakobsson and Blackstenius. The latter would prove to be a thorn in Ireland’s side all night with her pace and tricky feet, often turning Louise Quinn, Savannah McCarthy and Niamh Fahey inside out. But with last ditch tackles, bodies on the line and some good goalkeeping, the Swedes struggled to find the back of the net in the opening 38 minutes. 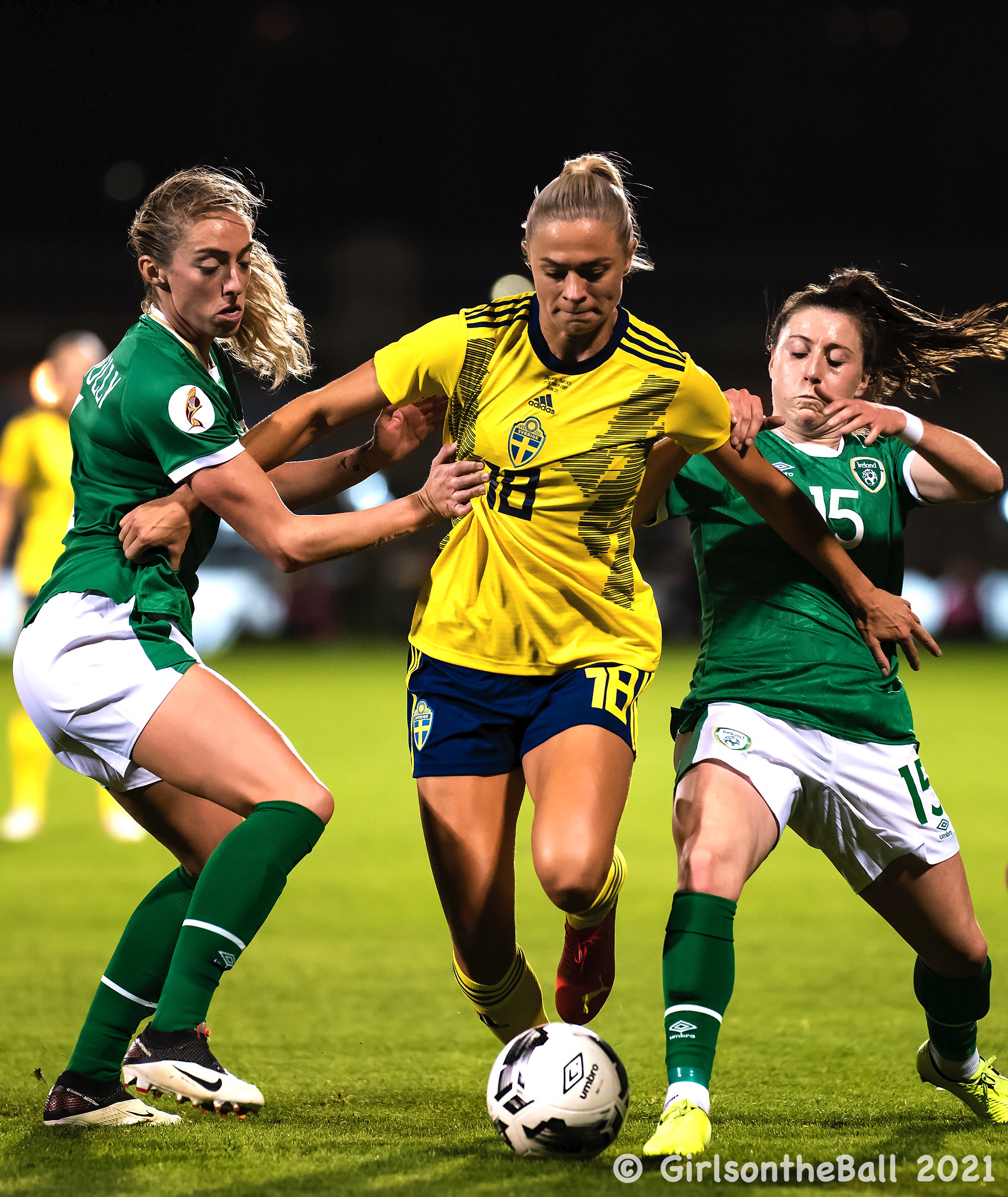 It wasn’t just the front three causing problems in the box. Sweden had chances outside of it too. Filippa Angeldal’s long-range curling effort is one that stands out, forcing Brosnan into a fine save, tipping it over the bar. It was a stand-out performance from the Irish goalkeeper that saw her pick up Ireland’s player of the match.

The hosts weren’t without chances of their own and had potential on the break with McCabe and Payne looking bright up front for the home team, but ultimately with little support. They failed to really challenge Hedvig Lindahl throughout the match.

It came as no surprise then that it was Blackstenius involved in Ireland’s eventual undoing. With an impressive run down the left, she turned her way into the box and had a shot. Unluckily for Louise Quinn, in her attempt to block the ball, she deflected it into the back of her own net. While Sweden had been in control for much of the first half, Ireland had been resolute. Still, it was the visitors who went into the break ahead.

The second half got off to a fiery start with three yellow cards shown in four minutes. Jakobsson, Hurtig and Jamie Finn all went into the referee’s book early on. You’d be forgiven for thinking that this second half was going to be a heated affair but both teams thankfully settled down.

Sweden continued much how they left off, in control with Blackstenius and Rolfö forcing Brosnan into good saves. Pauw rang the changes in the 74th minute bringing on Leanne Kiernan and Amber Barrett for Payne and Finn. They had clearly been instructed to run at the Swedish defence and their pressure paid off with Ireland winning a couple of free kicksand a corner in the closing minutes.

The home team were not done yet and had clearly stepped up in the final ten minutes, seeking the equaliser. But Sweden held firm, with Eriksson making a number of important clearances out of her box. Even with six minutes added time, it wasn’t enough for an equaliser.

It was not the result they wanted but Ireland showed more progress. Many a team have been swiped aside by the Olympic silver medallists but the Girls in Green displayed plenty about them that can be built on. Pre-match, Pauw said that they improve every single game and that was again clear to see. With that kind of performance, they will have to think they have a real opportunity to come away from Finland with points on Tuesday night.