Sarina Wiegman’s England era got off to a high-scoring start on a balmy September evening in Southampton. On a night that saw glimpses of the present and the future, the Lionesses eased past North Macedonia, left with only the feeling that it should have been more emphatic.

The first glimpse of the future was that of Leah Williamson leading out the team due to a late injury to Steph Houghton. For followers of the English game through the years, there is no doubt that Williamson was born to captain her country. It wasn’t a question of if, but of when. As with everything she’s achieved so far, the Arsenal star took it in her stride with her typical calmness: “This is probably the biggest honour in football. I’ve told you a million times how much I love playing for my country and how proud I am to be English. So yeah, it was very special.”

In the absence of Keira Walsh, Wiegman’s biggest question was what to do in midfield. She opted for the trio of Williamson, Georgia Stanway and Ella Toone, a combination of names on the team sheet that should have satisfied even the hardest to please fans. This was again a look to the future, and even if, as is most likely, Williamson will drop back into defence when Walsh returns, it was the perfect stage to test this trio out. There were also places in the starting XI for Beth Mead and Alex Greenwood, both with a point to prove after missing out on an Olympic spot. 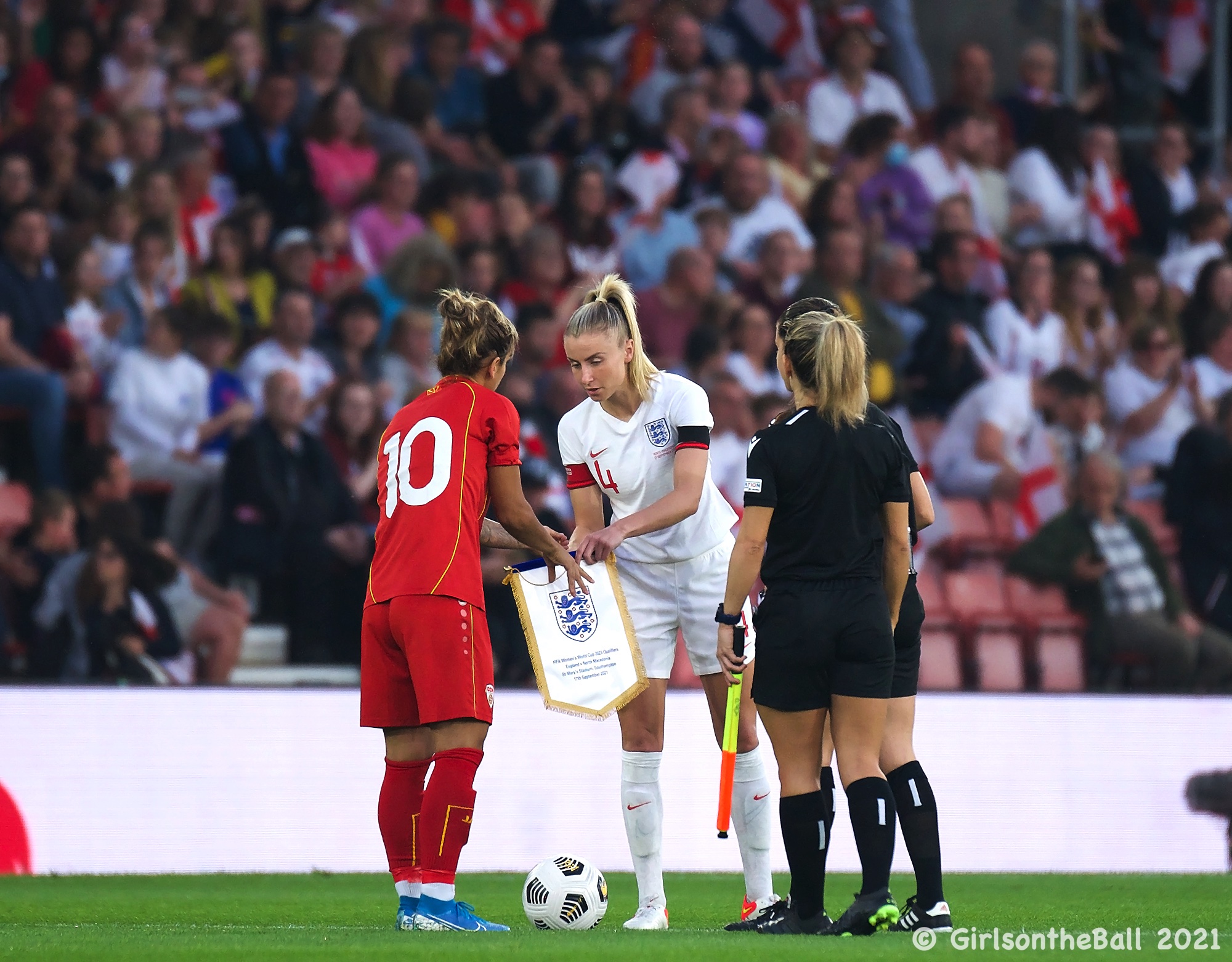 The Lionesses dominated from the off, unsurprising against a North Macedonia side ranked 131st in the world. But for some wasteful finishing and good goalkeeping, England should have been at least 4-0 up in the first 20 minutes. Instead, they were just the one with Ella Toone breaking through onto a pinpoint Williamson pass to finish with aplomb, scoring her first competitive goal for her country.

Chances came and went once more, and it wasn’t until just before half-time that the Lionesses managed to double their lead. Most would have had money on Ellen White continuing her march on becoming the all-time top England goal scorer before the game. She continued that progress just before the break, gliding a Toone assist into the back of the net. Minutes later there was a third when Julija Zivijkj displayed the kind of finishing that was missing to turn a cross into the back of her own net.

The second half continued in the same vein – England dominance but struggling with that final touch. It wasn’t until the 67th minute that they added to their tally when Williamson was brought down. Replays showed the foul was in fact outside the box, but the referee pointed to the spot and White stepped up to convert the penalty.

Wiegman rang the substitutions with Jill Scott and Beth England entering the fray. Scott almost had an immediate impact, clipping the top of the bar with a strike before England marked her return to the setup with a reactionary header to make it five. Two minutes later there was another, the unfortunate Sara Kolarovska turning Mead’s cross home.

The Lionesses added two more in injury time – another header from England and fine finish from Mead – to wrap up the occasion. Reflecting after the game, Wiegman was pleased with her side’s starting point but recognised there was more work to do: “I think the performance was ok. It was good. We wanted to create a lot of chances and I think we have created lots of chances…We should have been a little better in the final third, just the final decisions. But still, we scored eight and I think it’s a very good start. I’m proud of the team.”

There is only so much you can really gauge from these fixtures. Most important is the victory and the Lionesses can expect the same style of game as they move onto Luxembourg on Tuesday. However, everyone knows the real tests are still to come in the form of the new February competition and Euro 2022 when you can challenge yourself against the best in the world. For now, it is about ticking off the wins necessary to reach another major tournament.