The magic of the FA Cup returned for Leicester City as they capped off their superb season with a stunning comeback against Manchester United to progress to the quarterfinals of the competition.

The Foxes are no stranger to a “cup-set”, having knocked Reading out at the same stage last year. As their manager, Jonathan Morgan, said post-match: “There’s something about the fifth round where we seem to be a bit of a giant killer!” It was a fitting end and just the start of preparations as they ready themselves to enter the Barclays FAWSL next year.

For United, however, it was a loss to end a turbulent few days at the club. The news that Casey Stoney was resigning from Manchester United had taken the women’s football world by surprise earlier in the week. One of England’s finest young coaching talents has been integral to the United project over the last three years. She built a squad from scratch, which is no mean feat, achieving promotion from the FA Championship in their inaugural season before taking them with in a whisker of Champions League qualification in their first full Barclays FAWSL campaign. Much has been rumoured about her departure but in her own words, it was “just the right time” to move on: “It was the right choice for the right reasons. It’s been an emotional four days and I take responsibility for this loss, because it’s probably my news that’s impacted it. But they fight for me every single week and that was no different today.” 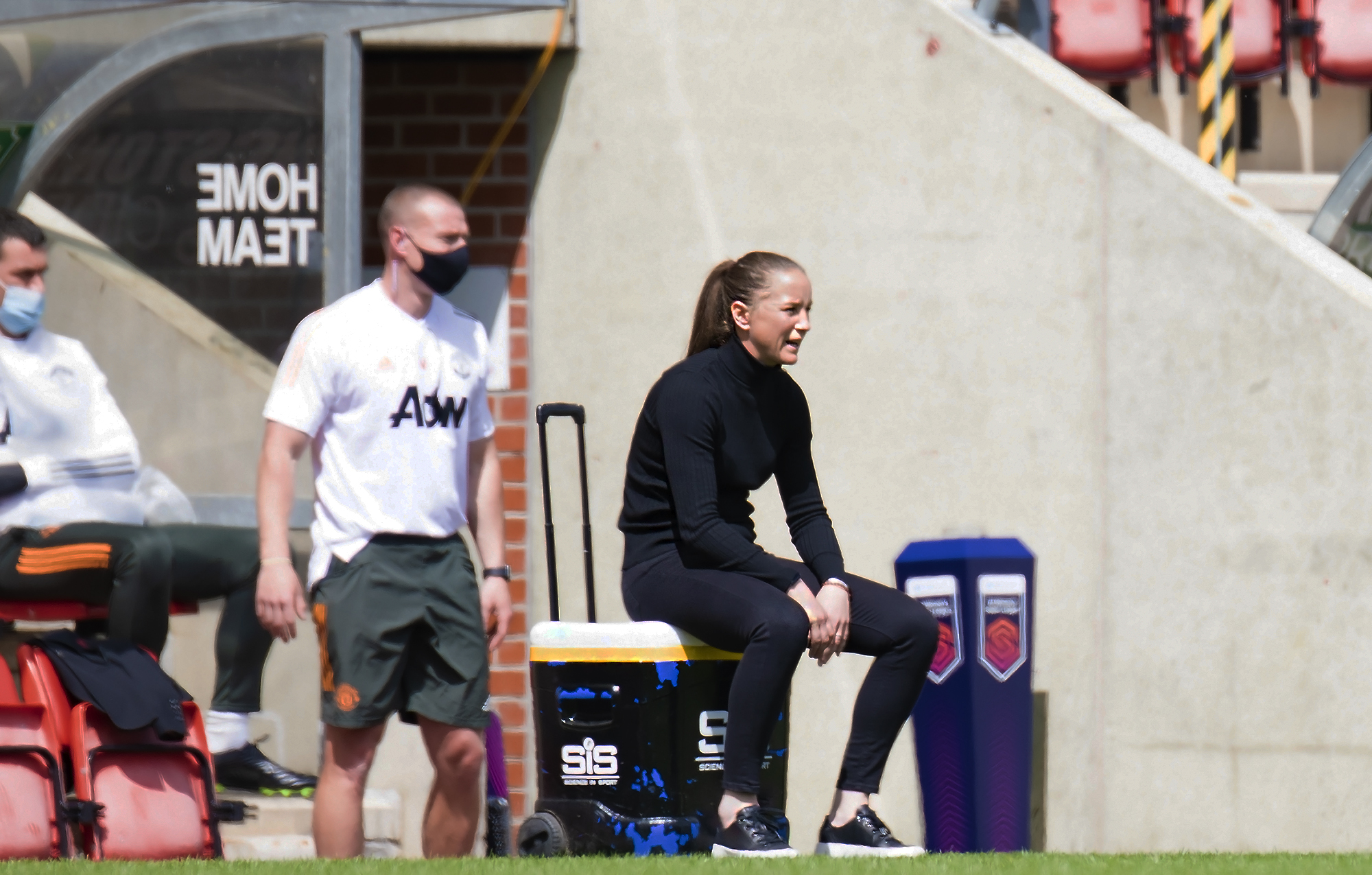 It is true that United were not at their best, but for a good 70 minutes (bar a minute in first half injury time), they always looked like they would find a way. Controlling the ball from the off, their build-up play, especially through Martha Harris and Kirsty Hanson down the right, looked promising but they lacked a cutting edge in front of goal. Leah Galton came closest in the opening stages with her fierce shot being well stopped by Kirstie Levell in the Leicester goal.

They found their breakthrough with half an hour played when Jess Sigsworth fooled the defender to slot home Galton’s pass. She and the team wheeled away towards their manager to celebrate, the bond between them clear to see.

However, Leicester have shown their attacking potency week in, week out this season and do not give up without a fight. While having to be resilient at the back, they certainly were not ditching the style that has set them in good stead all year, something that Morgan was keen to emphasise post-match: “We decided to play a bit on the transition, but as you can see, in the final third, we still played football. We still got success in playing our way, albeit not as often as we’d been used to in the Championship, naturally”. The prolific Natasha Flint dealt the hosts a bit of a warning when she broke through the backline only to be halted by an offside flag. Minutes later, deep into injury time, Shannon O’Brien worked the space and with a fine finish levelled the score.

The second half began in much the same way with United controlling the ball. Hanson, the hosts’ best player on the day, forced Levell into another solid stop before they regained the lead through Jane Ross. In the minutes that followed, they had the opportunity to kill the game with Ona Batlle’s header cleared off the line.

In the end they were made to pay for their lack of clinical finishing. One goal is never enough, especially against this Leicester team, who knew there were errors in this United defence. They were proved right when, pressing the backline, Hannah Cain was able to pounce on a mis-placed back pass from Maria Thorisdottir and slot it home. A minute later, the visitors were ahead. Millie Turner must have known not to give Flint space in the box, but she was afforded all the time to turn her inside out before accurately firing goalwards. Putting the visitors in front for the first time. 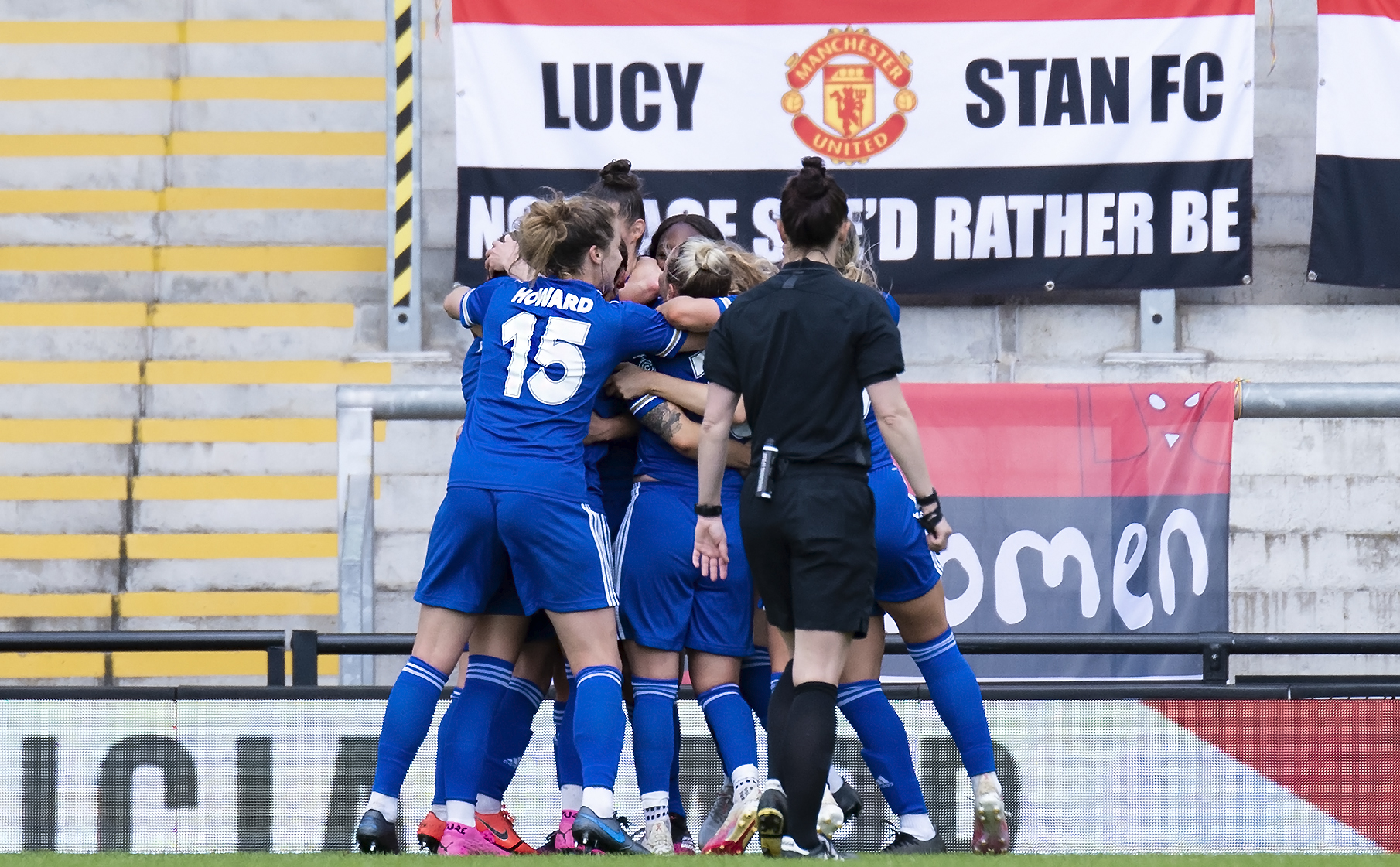 In many ways, the second half was the story of the United’s season post-Christmas, denying Stoney the opportunity of a positive farewell: “[It was a] summary of our season: missed chances, poor goals conceded. I thought we were in complete control…Unfortunately, defensive errors really cost us and not putting our chances away.” A change is on the horizon, under a new manager, but what Stoney has achieved cannot be underestimated with the progress her group of players have made, who she holds in the highest regard: “I think when I walked in the door on July 8, 2018, I had a very clear vision, ambition, and I recruited an incredible bunch of staff and players. The credit is completely theirs. They inspire me every day to be a better manager, to be a better coach. I get up in the morning and I want to be better for them. I am very proud of what we’ve built and hopefully they can take it forward now.”

As for Leicester, the Morgan project continues. A side brimming with young talent will be embarking on the next step of their journey. As with their men’s side, they are defying the odds; a special club quietly going about their business in the right way: “We’re little old Leicester, aren’t we? We’re under the radar; we do things our way. It’s a great club; there’s a great club ethos. The passion that Top [Aiyawatt Srivaddhanaprabha] puts in for everyone is brilliant and we just look to build on that every year now.”