It has, at times, been a tough welcome to the Barclays FAWSL for Aston Villa. And as the winter descended on Walsall early on Saturday afternoon, they had to display all their fight and grit to earn a point against a confident Reading side.

Having shipped seven goals the week before, Gemma Davies made five changes to her Villa side to try and shore up a leaky defence. Elisha N’Dow came in to join Anita Asante and Natalie Haigh in a three at the back. Sophie Haywood and Emily Syme entered the midfield while Emma Follis partnered Stine Larsen in attack, with Mana Iwabuchi sitting in the 10.

By contrast, Kelly Chambers made only one change to the side that had performed so impressively against Arsenal. Kristine Leine had been injured during that game, so Bethan Roberts came in to replace her at right back. Captain Natasha Harding lead the line once again alongside Lauren Bruton.

The visitors began the first half with the same gusto that they had the previous weekend and threatened to blow Villa way in the opening stages. This whirlwind of energy saw them take the lead in the third minute – Angharad James pounced on the rebound after a long-distance Jess Fishlock shot was well saved. 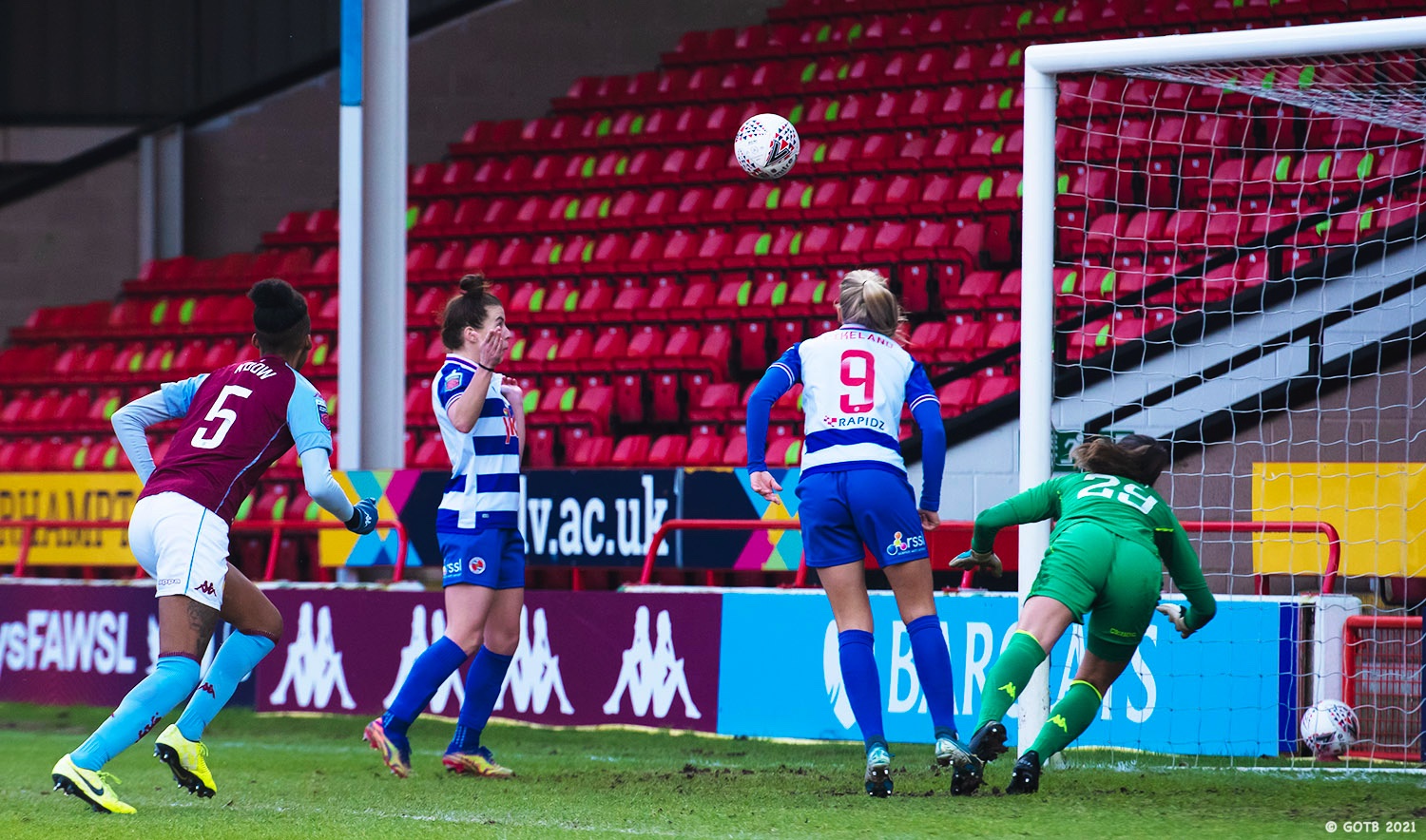 The pressure did not drop after the opening goal. One of Reading’s best attributes is their midfield press, and they were on Aston Villa players as soon as they received the ball. That and the issues with the hosts’ 3-4-1-2 formation – Sophie Haywood and Caroline Siems were too high up the pitch, allowing acres of space for the likes of Emma Mitchell to break at pace – saw them dominate the first half an hour. Mitchell herself saw a 20-yard curler tipped over the bar by the impressive Lisa Weiß. The Villa keeper was called on again to deny Roberts while Molly Bartrip saw a free header from a corner fly wide.

The trouble with not taking your chances is that it always gives your opponents a glimmer of hope. Having kept the deficit to 1-0, the hosts began to create some chances of their own. Larsen and Follis were the instigators – the former produced her side’s best chance of the half, seeing her shot blocked away vitally; the latter’s running set up an opportunity for Iwabuchi who was denied by a brilliant tackle eight yards from goal by a grounded Deanna Cooper.

Villa came out in the second half re-energised and within ten minutes, they had levelled the score. It was a first Aston Villa and Barclays FAWSL goal for new signing, Mana Iwabuchi. Winning a free just outside the box, a delightful low ball in from Haigh found the Japanese star in the six-yard box to turn home.

As so often happens, however, the hosts dropped their level after the goal and Reading re-took the lead just two minutes later. Fishlock found Rowe in space to the right of the box and she sent a low shot through a body of players and into the back of the net.

The snow began to fall, and Banks’s Stadium gradually changed into a winter wonderland. As the conditions got trickier, the game got scrappier and the orange ball was required as the visibility lessened. Danielle Carter wasted two good opportunities to extend her side’s lead while Villa continued to push for the equaliser.

It finally came in the 91st minute. The brilliant Iwabuchi turned creator, cutting back to Diana Silva in the box to level the score. With that, the game came to a close; after a dangerous start, the league’s newbies displayed their credentials to claim a valuable point in the fight to stay in the league.