Could this be the moment that will spark Bristol City’s season into life?

The Vixens have not had an easy time of it so far this campaign. They sit at the bottom of the Barclays FAWSL, having shipped 45 goals and without a win. But on a rainy Wednesday night in Twerton (what else does it do in the south west?!), they displayed the sort of resilience that might just give them a chance.

Their opponents were Aston Villa at the quarter-final stage of the Continental Cup, with both sides making their first appearance of 2021.

Tanya Oxtoby was without the experience of her number one keeper, Sophie Baggaley, and Carla Humphrey due to both returning positive Covid-19 tests earlier on Wednesday. Aimee Palmer started in the middle; the 20-year-old captaining the club where she started her career. Young forwards, Ebony Salmon, Emma Bissell and Charlie Wellings, led the line, adding plenty of pace to the attack.

On the other side, Gemma Davies gave opportunities to her younger players. Representing the English youth system, Emily Syme came into the midfield area while Asmita Ale took up her position at right back. Villa’s forward line looked equally quick with the impressive Shania Hayles and speedy Portuguese star, Diana Silva, involved.

The early stages of the game were dominated by the visitors, who perhaps should have been two or three up in the first 20 minutes of the game. With Bristol sitting off them, they pushed forward with ease. Syme had the first big opportunity of the match, gliding into the box, but opted to pass instead of shoot and the move fizzled out. Moments later, Benedicte Halånd, who put in a solid performance all evening, produced a fantastic point-blank save to deny Diana Silva. 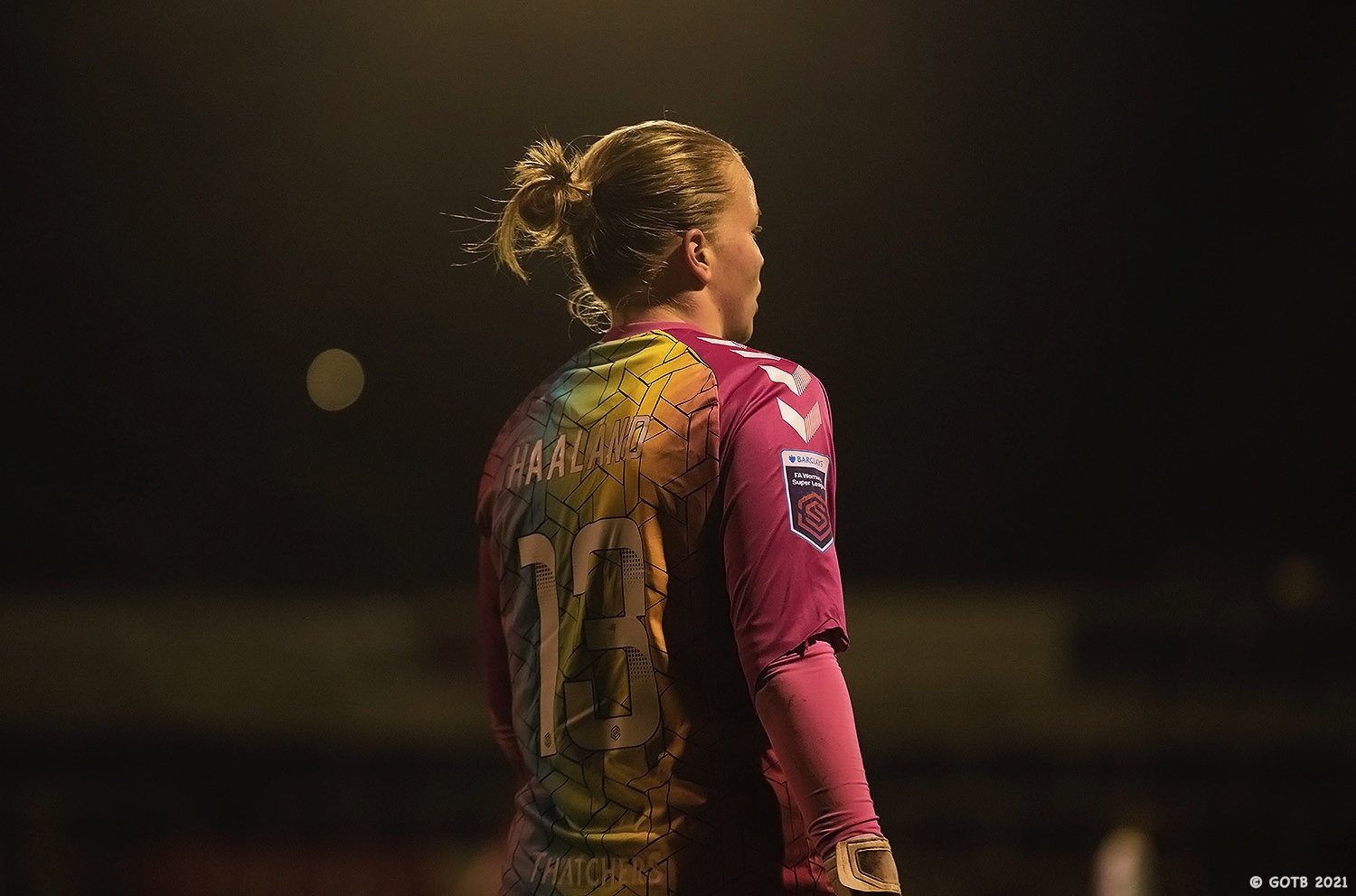 With some resolute defending added to a little bit of luck, Bristol managed to keep the visitors at bay and began to bring themselves into the game. Salmon was the trigger up front. Her development has been clear to see over the last few months and she was their main source of danger. After holding the ball up well, she rode an Elisha N’Dow challenge before holding off Anita Asante in the box. She probably did not quite connect with the shot cleanly, but it still required Sian Rogers in the Villa goal to stick out a vital leg and divert it wide.

The second half started with the visitors on the front foot once more. Halånd had to make another big stop to deny Hayles at the near post. But it was that Bristol counterattack that turned the game on its head. They broke the deadlock with Wellings playing a perfectly weighted ball to Salmon. Taking on and beating N’Dow in the box, she curled her shot into the back of the net with a fine finish.

Villa had a chance to level the score straight away when Hayles had an effort scrambled off the line. Immediately, Bristol broke up field and doubled the score – Salmon once again burst through onto a lovely flicked pass, rounded Rogers and sent it home. 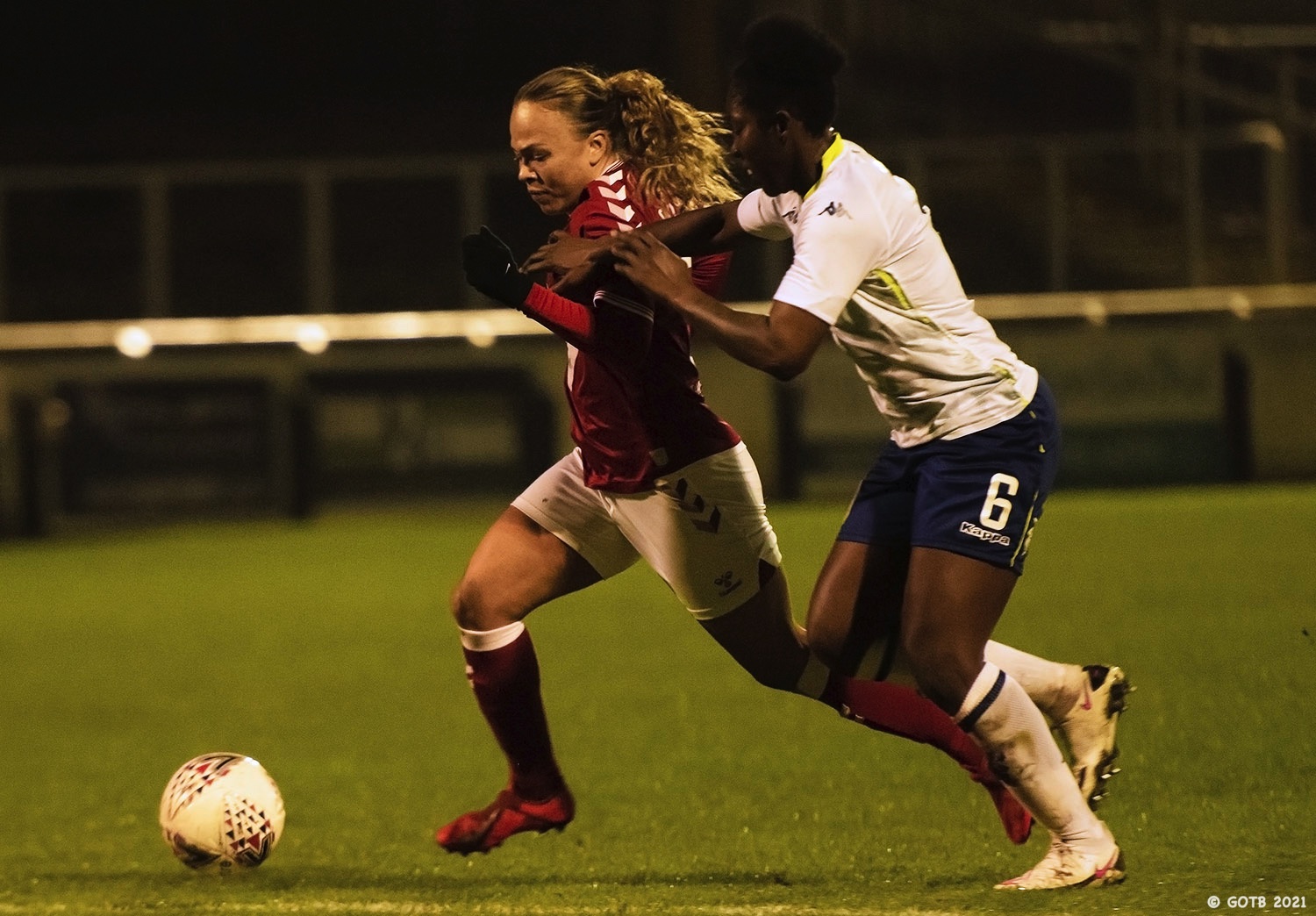 With half an hour left to play, Villa threw on everything they had to try and turn the tie around. Japanese world cup winner, Mana Iwabuchi, made her debut while Emma Follis entered the fold as Davies tried to add impetus up front. Iwabuchi came very close to making it a debut to remember but saw her effort denied by another goal-line clearance.

Bristol began to sit deeper but while they were visibly tiring, their defence remained strong. They did concede in the 85th minute, when Stine Larsen headed home, but held strong to see out the victory. It was an element of their performance that wasn’t missed by manager Tanya Oxtoby who praised her side’s resilience after the game: “I thought we showed great determination. I thought we had to defend for our lives at times. Villa threw the kitchen sink at us and we did what we had to do. We took our chances at the other end and for the players to come out and perform the way they have, after the day we’ve had, says a lot about their character.”

Bristol can move forward to the semi-finals with renewed confidence and belief and perhaps an added spring in their step as they take on Everton in their next FAWSL match.