England put in a determined performance to open their 2019 SheBelieves Cup campaign with a comeback win over Brazil.

Many a blanket and woolly hat were seen around the Talen Energy Stadium as the tournament began in freezing conditions in Chester, Pennsylvania.

Phil Neville named a strong attacking line-up to take on the 10th team in the world. Abbie McManus was chosen to partner captain, Steph Houghton, in defence while Chelsea’s Carly Telford took up her place between the sticks. Setting up in a 4-2-3-1 system, Izzy Christiansen joined Keira Walsh in the middle while Ellen White returned to lead the line.

As expected, Marta captained a Brazil team that was looking to get back on track after a run of four defeats. 40-year old Miraildes Formiga took up her usual position in central midfield, while Andressa Alves and Adriana adding impetus in attack.

It was the Brazilians who arguably jumped out of the blocks the quickest while the Lionesses were sluggish, struggling with their legs and the slow playing surface. With 15 minutes on the clock, Brazil capitalised. Marta cut out Houghton’s clearance from the back and broke into the box. She managed to avoid a flying recovery challenge from the England captain and found herself up against Lucy Bronze in front of goal. The right back stuck a foot in and appeared to get a strong touch of the ball, but the referee pointed to the spot. Andressa Alves stepped up and dispatched the penalty past Telford. 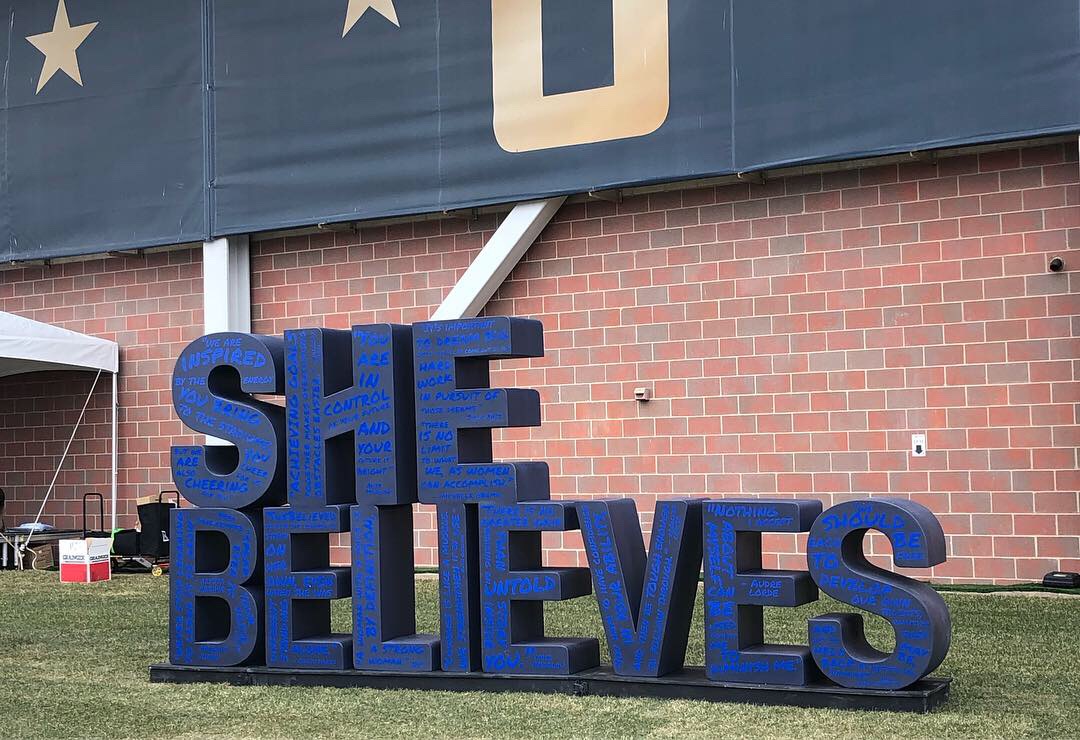 While a debatable decision, England were far from their best and Brazil were able to get in behind them on several occasions. Marta had another chance a few minutes later with her cross flashing narrowly over the bar while Formiga sent a low shot from distance wide.

A decent chance for Fran Kirby suddenly sparked England into life and they enjoyed some substantial pressure as the half came to a close. This was followed by two dangerous crosses from Alex Greenwood that just eluded White who was lurking in the penalty area. They went in at the break 1-0 behind, with much improvement needed.

Whatever was said at half-time worked and England came out in the second half with a new lease of life. Within four minutes, they were level through a well-orchestrated goal. Kirby was finding more and more space in the pockets and slipped the ball into the path of White. The striker needed no invitation and shot low in the bottom corner.

Brazil still posed a danger on the counter-attack but the Lionesses were beginning to look the ones more likely to grab the winner. Parris saw a chance brilliantly saved by Aline before poking the ball just wide at the near post.

In the 75th minute, they sealed the three points with a special goal. Beth Mead had come on for Karen Carney a few minutes earlier and found herself out in space on the far side of the pitch. With a swipe of the boot, she directed the ball into the far top corner. It was certainly one to watch on repeat again and again; a strike worthy of winning any game.

Everyone in the England squad would probably admit that they were not up to standard in the first period. But while they were not at their best over the 90 minutes, they found the character to fight back and find a result.

Ellen White was proud of how her side were able to turn things around:

“It was a game of two halves to be honest. We were disappointed with the first half. I think we went in at the break and changed some stuff; we went a lot higher and obviously we scored within about four minutes. That really gave us a lot of momentum and confidence to go all guns blazing…I don’t know what it [England’s slow start] was to be honest. We were just trying to find our feet and our groove. The pitch was super slow as well. I think it just shows our character to come out in the second half and to not concede more than one.

Phil Neville highlighted his side’s failings in the first half but also praised the determination they showed to win the game:

“First half, we didn’t play good football. I was really harsh on the team at half-time because our standards are better than that. I was probably too harsh really to be honest with you because after the game, when you’ve won and the emotions are gone, then you think about what they’ve been through over the last 3 or 4 days. We’ve trained them well the last couple of days and I think in that first 20 minutes, I felt we were just off the pace. You could tell that Brazil had been here longer than us in terms of the time difference. We didn’t play with any kind of purpose or intensity and we got punished. It wasn’t until the last 15 minutes of the first that half that we started to get a bit of a second wind.

Then in the second half, I thought it was the best we’ve played in terms of determination to win a football game. The last thing we said to them was that we have to win this game. We prepared for it like it was a knockout game and I thought we played like that in the second half. The substitutions and the movements were positive, and I thought there was only going to be one winner.”

The return of Ellen White

Ellen White loves this tournament and the goal made her the all-time top scorer in the competition. After a long absence through injury, the return of a major goalscorer is timely for the Lionesses ahead of the World Cup.

The England striker is certainly happy to be back and in amongst goals for her country:

“It’s been a long 5 or 6 months but I’m all about this. I love wearing an England shirt; I love playing for my country; and I am delighted to have scored that goal.”

And Phil Neville had nothing but praise for his goalscorer, highlighting her importance to the squad:

“She’s fantastic – experience; presence; determination. She’s important; she’s going to be a big player for us, and I love it when my centre forward scores goals because that breeds confidence.”

Was it a cross, or was it a strike? That was the question that everyone was asking after the game. Having watched Beth Mead scored plenty of worldies over the years, her most recent coming in the FAWSL, we would edge towards the latter.

At the end of the day, however, it doesn’t really matter, and Mead was thrilled that it came off :

Phil Neville had nothing but praise for Mead and her “special” goal:

“You might think that was a cross, but she’s done that before and we’ve seen her do it in the FAWSL. That was no fluke; that was deliberate; and I hope she told you that in the Mixed Zone. She strikes the ball like nobody else – she’s got real whip and dip on it.

It was a special moment for Beth because she missed the Qatar camp and she was under pressure to force her way in to my thinking. I said to her at the start of this camp that you’ve got to make an impact. Making an impact isn’t just coming on and doing ok; it’s scoring goals and making assists. The glint in her eye when she came over to me at the end was sort of like “That was one notch for me, boss”.

A worrying aspect that needs to be addressed will have been the defensive frailties that were noticeable, especially in the first half. Whether it was down to a different central defensive partnership or a lack of concentration, the Brazilian forwards were all too often getting in behind and causing problems. It is always risky to have to rely on last ditch defending and causes situations like the events that led up to the penalty. The coaches will need to address it as we head into the summer.

The nature of this tournament – 3 games played in 3 states over 7 days – provides the perfect preparation ahead of a major tournament.

In the response from his side, Phil Neville saw indications of the qualities that will set them up well while in France:

“The World Cup is going to be physically and mentally brutal for a set of players that are going to go every 3 or 4 days. This replicates it. When people talk about this tournament, I actually think it’s one of the best in the world because it takes you right to the edge of physicality and mental pressure and managerial pressure. We’re playing in good stadiums against the best teams and you have to make the right decisions. I thought today we did that. From a playing point of view, it was that never-say-die spirit in the second half that showed me that.”

It’s a quick turn-around as the teams head south to Nashville for the next set of matches in two days. England will be facing the hosts on Saturday afternoon, at 21.30 GMT. Make sure you tune in to BBC Two to catch all the action.