The second matchday of the 2019 SheBelieves Cup played out yesterday at the Nissan Stadium in Nashville, Tennessee. In front of a 22,000-strong partisan crowd, England took on the hosts USA in a thrilling encounter.

It was a nervy start for the Lionesses as the US gained the upper-hand. Within minutes, Megan Rapinoe whipped in a corner and the resulting header was cleared off the line by a composed Abbie McManus.

Despite being under some early pressure, England rode the attacking storm. They began to grow in confidence defensively but were struggling to make in-roads up front. With both sides defending solidly, the game needed something special to break the deadlock. Step up Rapinoe!

With half an hour played, Kelly O’Hara sent in a cross that was nodded out. Rapinoe expertly chested it down before launching her shot from the edge of the box and into the back of the net. A top-class strike from a world class player!

The England of old may have dropped their heads after a sucker-punch like that but not today. No more than two minutes later, they were level. US debutant and goalkeeper, Adrianna Franch, picked up a back-pass giving England an indirect free kick in the box. It was a tricky angle for captain Steph Houghton but facing a big wall and an on-rushing Rapinoe, she curled her shot sweetly in the bottom corner. The first half seemed to have flown by and the teams went in level at half time. It was time for a Phil Neville half-time talk.

After catching our breath, the second half got underway with a rejuvenated England team. It took just seven minutes for the visitors to take the lead and what a beautiful move it was. Lucy Bronze, in her new midfield role found Fran Kirby who dinked the ball first time into Nikita Parris’ feet. The in-form forward beat the offside trap and whipped it home from a tight angle. She had been working hard to get in behind the US defence all afternoon and it paid off. 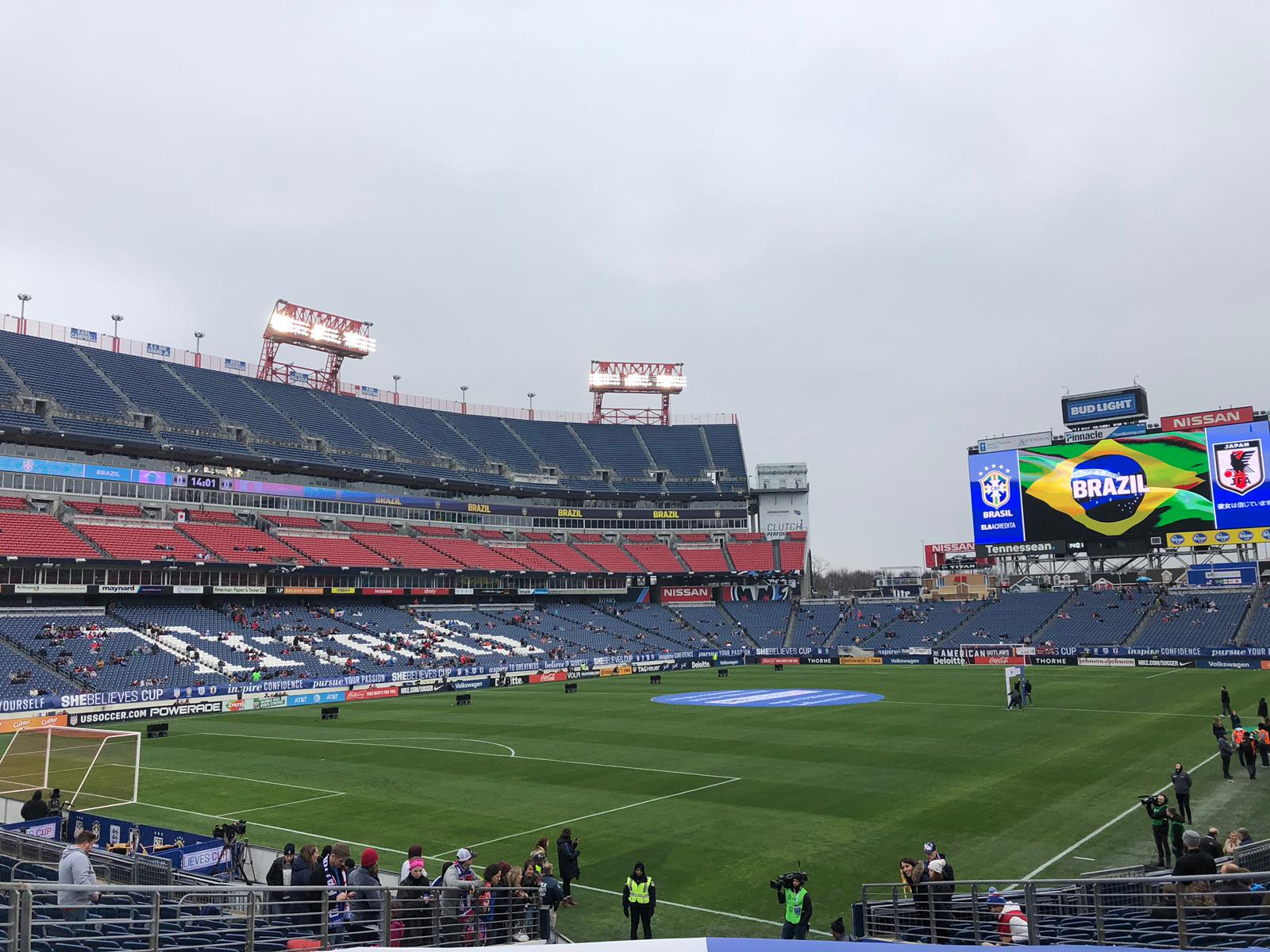 Much like the first half, there was almost an immediate response to the goal with Rapinoe sending in a dangerous cross for Karen Bardsley to punch clear. Down the other end, Ellen White had a great opportunity to extend England’s lead but drove her effort agonisingly wide.

The USA rang a series of changes in the hopes of getting back in control and it paid off. After pressure from the home team, a poorly defended corner was poked home by Tobin Heath drawing them level.

It was a nervy final 20 minutes as both teams had chances to kill off the game. wide. With the introduction of Beth Mead, Georgia Stanway and Jodie Taylor, England weren’t playing for a draw. They wanted all three points and posed a continuous threat on the counter attack.

As the game came to a close, there was a real heart in mouth moment when Rapinoe appealed for a penalty, but the referee correctly waved her appeals away. England held firm with some last ditch defending and kept the world champions at bay.

Great advert for the women’s game

From start to finish, this match was highly intense and competitive. Yes, there were mistakes, on both sides, but there were also many top-quality moments. Both teams were toe-to-toe, trading blows right until the end and it made the whole spectacle thoroughly enjoyable to watch. In the four years of covering this tournament, it was our favourite game of the lot.

England manager, Phil Neville was eager to emphasise this before his press conference got underway:

“I would just like to say – forget the result and who played well. I thought that was an unbelievable advert for women’s football and it felt like a top game. I said to Jill Ellis at the end that both teams should be proud. Both teams went toe-to-toe; both teams wanted to win; and that’s how football should be played. I think both coaches would probably admit that the result in the end wasn’t the most important thing but that we’ve just put on an advert for women’s football that’s probably as good as I’ve seen.”

The Lionesses displayed a resilience to them that is becoming a hallmark of their performances this tournament. This is the second time they have fought back from 1-0 down to find a result. In the first couple of minutes in this game, they faced danger with Abbie McManus clearing off the line and rather than panicking, they rode the wave and began to settle into the football match.

Goalscorer, Nikita Parris, was particularly proud of her side’s performance and thought it was a good sign of things to come going into the World Cup:

“I’m massively proud of the girls. From the start against Brazil when we went 1-0 down to here when we went 1-0 down, our response was unbelievable. We don’t ever get down on ourselves because we know that quality that we’ve got. In offensive moments, we know we can cause some damage and we did that today. Obviously, we are disappointed to have conceded 2 goals, in particular one from a set-piece but we’ll go and review that and I am sure by the World Cup, we will have it fixed.”

After a few dodgy moments against Brazil on Wednesday, Steph Houghton came into this game all fired up and produced one of the best performances we’ve seen from her in an England shirt.

She was strong in the air, physical on the ground and pulled off tackles and interceptions that kept her team in the game. Add to that an indirect free kick that she struck perfectly into the far corner, it was a performance that led by example.

As we mentioned after the game on Wednesday, there were defensive frailties on show that were still present in this game yesterday. The ball in behind caused trouble for the England back-line and Megan Rapinoe was able to exploit the space on multiple occasions. Steph Houghton and AbbieMcManus put in strong performance to recover those situations for the most part, but it puts you under unnecessary pressure. The other aspect that was highlighted, was the lack of height and physical presence when coming up against set pieces without Millie Bright and Jill Scott on the pitch.

Central pairing of Walsh and Bronze

We saw it for a bit of the game against Brazil and this time, Phil Neville opted to partner Lucy Bronze and Keira Walsh in the middle to offer some defensive solidity to the side. It took the first half for them to get settled but there certainly were positive signs going forward.

Walsh was one of the stand-out players on the pitch and her progress over the last year or so has been evident and she controls the midfield for club and country with calmness and quality.

Neville was impressed by what he saw from his two midfield players:

“Today was more about the quality and the bravery to play football. I thought there was that determination, but I think it was the confidence to play. Our 2 central midfield players tonight were unbelievable. Lucy Bronze is the best player in the world. But Keira Walsh is now getting up to that level where she is world class and believing it. She takes the ball, she passes the ball, she’s athletic and she’s beginning to play with a smile on her face and a real energy. So, my 2 central midfield players today were probably the bravest players on the pitch in terms of having to take the ball under the most pressure. Then throw in the style of football that we want to play, it means that we have a good system. Do we continue with Lucy Bronze in midfield when we have so many quality midfield players? There will be games when we do and there will be games when we don’t because she’s equally as good at right back.”

It’s a quick turn-around again as the teams now head to Tampa, Florida for the final set of matches in two days. England will be facing Japan in a winner takes all match on Tuesday evening, at 22.15 GMT. Make sure you tune in to catch all the action.