The stage was set at Rodney Parade on Friday night as Wales hosted England in a make or break game. The prize for the winner, a place in the 2019 FIFA World Cup. The stakes could not have been higher.

These are the nights you live for in football! Whether you are a player, a member of staff or a fan, they can never not be magical occasions.

On paper, England were the favourites. Ranked 4th in the world, with a World Cup Bronze medal and a European Championship semi-final in recent years, the Lionesses are one of the big guns in the sport.

Wales, on the other hand, had yet to qualify for a major tournament. This would be their chance to make history. Their side is a mix of part- and full-time players but their improvement and togetherness as a unit has been clear to see over the last year or so.

Both managers had picked their strongest squads available. England boss Phil Neville crucially saw the return of Steph Houghton and Jordan Nobbs from injury, while Alex Greenwood took up the left-back position after her one game suspension. Jayne Ludlow, meanwhile, made one change to the side that had beaten Russia 3-0 last time out, with Kylie Nolan coming in for Rachel Rowe. 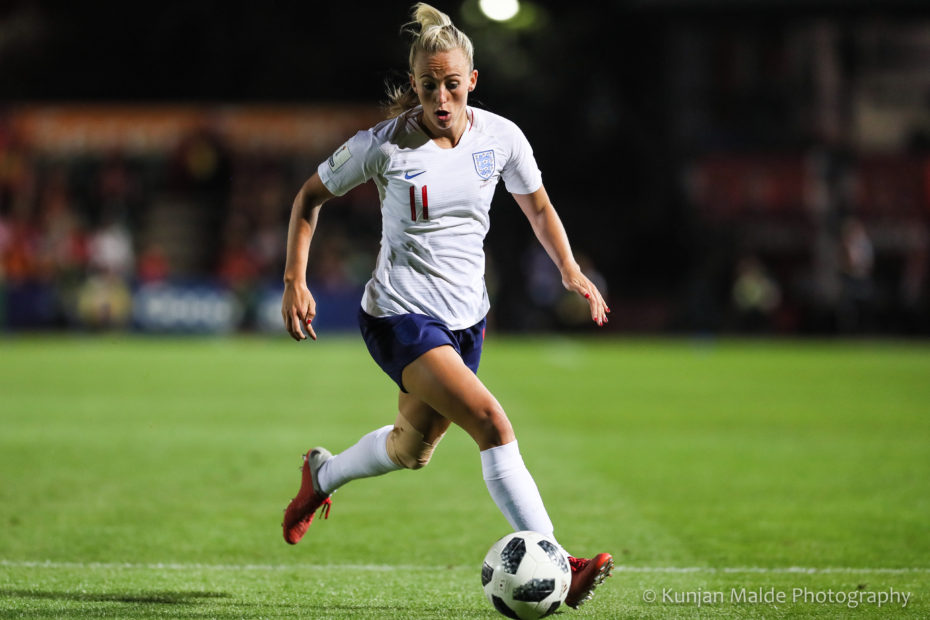 After a pulsating entrance and anthem, a frantic first half got underway. You could feel the tension and the stakes from the first minute. Buoyed by their home support, Wales pressed and harried England and created several chances that tested Karen Bardsley. Yes, they rode their luck at times, especially when Nikita Parris’ goal was incorrectly ruled out for offside, but they played with an energy and passion that caused plenty of problems for the visitors.

It was a different story after the break, however. England improved, moving the ball around the pitch, forcing all 10 Welsh players deep. Attack after attack came, with Wales unable to relieve the pressure, and eventually the Lionesses found the breakthrough. With Laura O’Sullivan saving off Jodie Taylor, the ball came out to Lucy Bronze. She in turn found Fran Kirby, who unselfishly spread it to an unmarked Toni Duggan. The Barcelona forward took her time and buried it home – a beautifully worked team goal.

Three minutes later, England doubled their lead when a sublime dink by Bronze was sent looping into the back of the net by Jill Scott. Parris then killed the game with 20 minutes to play, turning it home on the line after a rare mistake by O’Sullivan.

The Welsh had run out of steam and as the final whistle blew emotions took hold. Jubilance contrasted with heartbreak! England had qualified for the World Cup with one game to spare while Wales’ hopes were all but over. They still have slim chance at the play-offs but they need a few results to go their way on Tuesday afternoon. We’re certainly praying to the football gods that they get their second chance.

First and foremost, England are heading to France! The pressure is finally off and preparations can finally begin for a big ten months ahead.

Phil Neville came into the qualification campaign three games in and everything, bar the draw at St. Mary’s Stadium, pretty much went to plan. However, with Wales’ impressive performances over the last 18 months, England’s penultimate game became a “winner takes all” affair. The onus was on the Lionesses to produce and, overall, the manager was happy with his team’s performance on the night:

“I was pleased. When I took over, I said that we want to get to World Cup Finals..I thought it was an important game and we wanted to respect Wales but I also wanted to see my players play to their ability. I think in the second half you saw them play like one of the best teams in the world – with control, with one/two touch passing, with a bit of flair and enjoyment. These are the characteristics that I want them to take forward.” 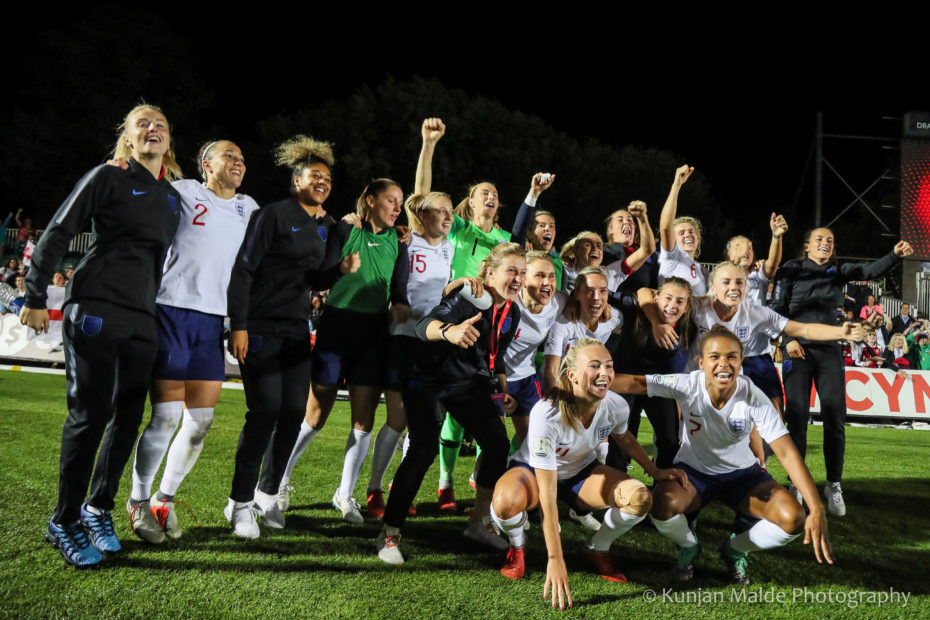 It has been a theme of England’s qualification campaigns in the past that they have struggled to break down sides who set up to defend. For the most part, they have come away with victories on these occasions but not without a bit of struggle to get there.

Their second half performance displayed the progress they have made in this respect. After a tense 45 minutes, they came out with renewed purpose, moved the ball well, forced Wales back and launched constant attacks.

Phil Neville spoke about how he had told his players to relax at half time and stick to the game plan and how that 30-minute period had been the best of his tenure to date:

“I am happy with the goals because they came at a time when we had planned to score them. All week, we had planned to attack and sustain that pressure and almost, like a boxer that’s on the ropes, eventually they are going to go down. That’s how we played the second half; we played on the edge of their box, every time they cleared it, we came back. Suddenly, when you’re shifting the ball from side-to-side, you can see the fatigue in the Welsh players’ legs.

Maybe walking out at half time, experience tells you in these games that it just takes one opportunity. We knew that’s what Wales were hanging on to. But I wanted us to play – my philosophy from day one has been that if we win and don’t play the way that we want, with enjoyment, then I’m not going to be happy and they’re not going to be happy.

In the second half, I saw a team that enjoyed their football and started to play the way that they could. I think this is a massive step for us as a group, I really do.”

There were several strong performances throughout the game, especially in the second half. The likes of Nikita Parris, Toni Duggan and Alex Greenwood really stood out with their turn of pace and delivery.

However, the player that shone for us was Manchester City’s, Jill Scott. From the first minute to the time of her substitution, Scott did not stop running. From her distribution to her physical presence in the middle, she had a massive impact on the game. Let us not forget the “olé” moment in the first half when she back-heeled the ball to herself in the box!

She is one of England’s most experienced players and lived up to that with a controlled and dominating match. Add a lovely looping headed goal into the mix, it was a performance well worthy of the “Player of the Match” award. 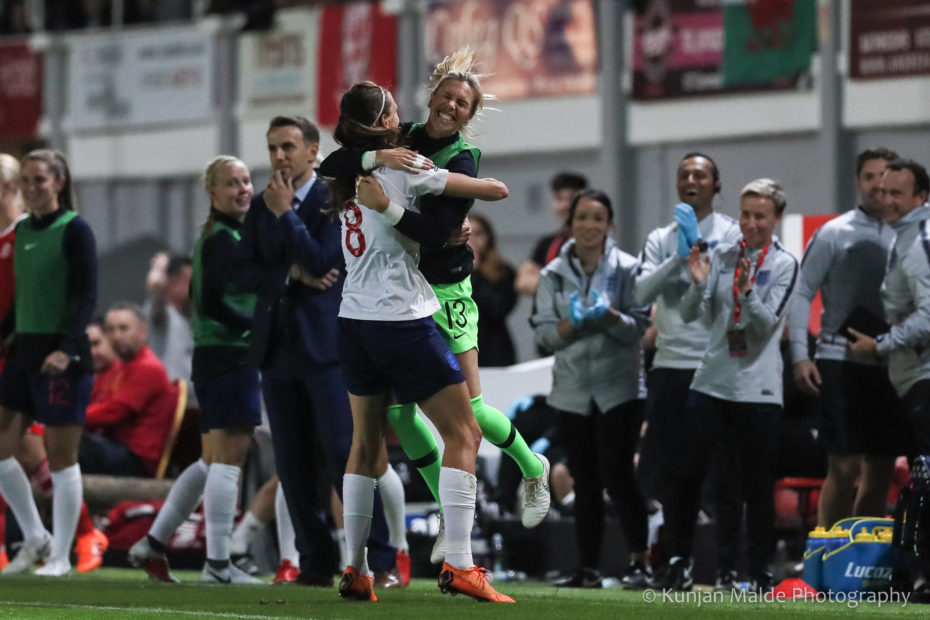 Debutants to be given their chance

The Lionesses still have one game to play with a long trip away to Kazakhstan. With qualification tied up and some key players – Fran Kirby, Jodie Taylor and Jill Scott – picking up some knocks, Phil Neville says it is time to give a chance to some of the players who have not had much game time.

“It gives opportunities to some of the younger players in the squad…Part of my team talk was to not even think about the World Cup but to win this game for the likes of Gabby George. She has been on six camps without even playing a minute. She’ll make her England debut on Tuesday. So too will Lucy Staniforth; she’s as close to the starting XI as any other midfield player.

First and foremost, we want to go out and win but we will see a team that gives opportunities to others to have a game. These players that are coming up are really pushing hard and that is why we are getting good performances.”

It may have ended in heartbreak but there is no denying that Jayne Ludlow and her Welsh side can be extremely proud of the last 18 months.

With every game, they built on their performances, becoming a tight defensive unit and developing an ability to take their opportunities when they came their way. In addition, their team spirit and passion have been undeniable.

They were forced to change their strategy in the lead up to this game. Needing a victory, they had to come out and push England to the max. They succeeded in the first half, causing several nervy moments for England’s back-line and goalkeeper, Karen Bardsley. Unfortunately for them, they were unable to maintain that energy in the second period and England took their opportunities as the Welsh tired.

In the end, they just fell short of the qualification but there is a real sense that this campaign has put Welsh women’s football on the map. Ludlow emphasised this post-match as well as the need for the Welsh FA to keep pushing the game forward:

“We’ve gone through 8 games of qualification and have been outstanding in certain areas. It is nothing to do with luck…We have said all along, it’s bigger than our senior team getting the results right now. It is hopefully going to be far bigger in the future. We as an association have work to do to make sure we’re offering those opportunities for young girls and to make sure we have players playing at the top level. It would be really nice to see a fully professional Welsh women’s team emerge over the next 2-3 campaigns.”

Phil Neville was also keen to emphasise how good Wales have been and where he thinks they are at on the world football stage:

“Wales are close. They’ve got really good players – Jess Fishlock, Kayleigh Green and Sophie Ingle would probably get into most top ten sides in the world. Their keeper, Laura O’Sullivan, has also been impressive over both games. Their spirit and togetherness – that Welsh passion – is something that they must always retain. I think that signing Jayne as coach for the next 4 years is massive for them because of her drive and her enthusiasm. They shouldn’t underestimate the quality that they’ve got. Obviously, speaking to Jayne before the game, the investment needs to keep pouring in now because you can’t just have a senior team, you’ve got to keep bringing young female players through. That’s the challenge for us all. We’re probably a long way ahead of Wales at this moment in time but if they keep showing the type of spirit that they’ve shown then I think they’ve inspired the next generation of female footballers. For me, that’s something they can be very proud of.”

There had been plenty of talk in the press about the suitability of Rodney Parade as a venue – despite the efforts of the England camp to play it down – but it turned out to be the perfect venue to match the occasion.

As the teams came out on to the pitch, the place was rocking. If that rendition of the Welsh anthem didn’t sent chills down your spine, then you are hard as nails. The crowd backed their side to the hilt and didn’t stop, even after it was clear England had sealed the win.

For the Welsh to sell out a stadium for the first time in their history was a big deal for the team. For England, it would have been intimidating but it was the kind of atmosphere you dream to play in front of whichever side you fall on.